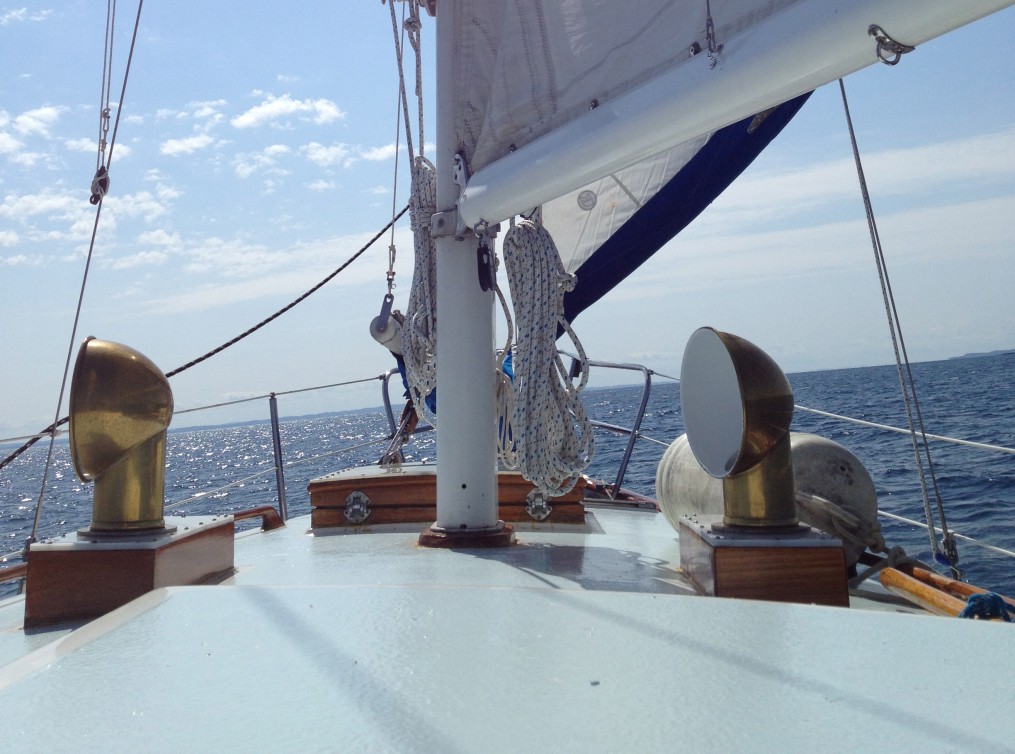 Getting ready to launch is one of the hardest parts of boating because of all the work that needs to be done and by way of a 10’ ladder up to the boat.  This means carrying everything up that you want, carrying everything down that you don’t want, and lifting Sammy up and down at her whim.  Things that must be done before the Namaste gets wet are: clean and wax the hull, install new zincs, modify the a/c pump brackets and install new water pump. . .Caution cannot be over emphasized! 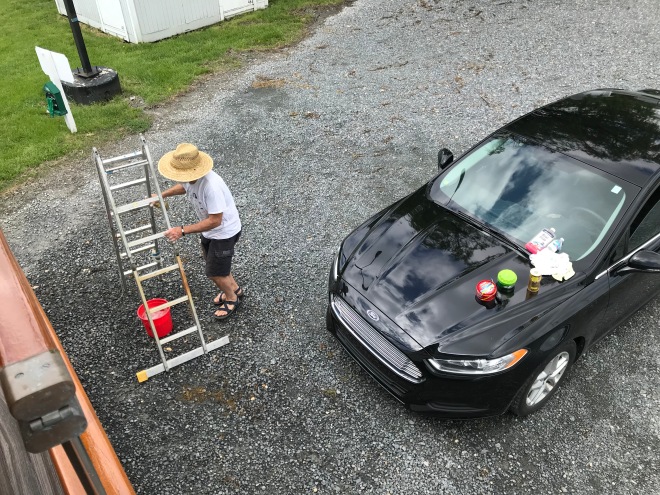 It is a looong way down.  Let’s get her into the water!

Preparation and launch went perfectly thanks to the four-person marina team who picked her up and dropped her in and then the next four who hip-towed and fastened her to the slip on F dock.  These are often seasonal jobs most of the world never considers but these guys are full-time proud, knowledgeable and highly skilled.  A big thank you to all those quiet heroes out there. 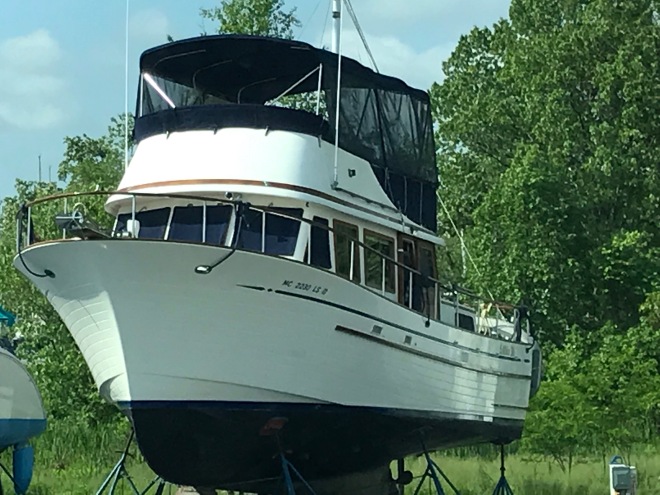 Namaste greets us “on the hard” 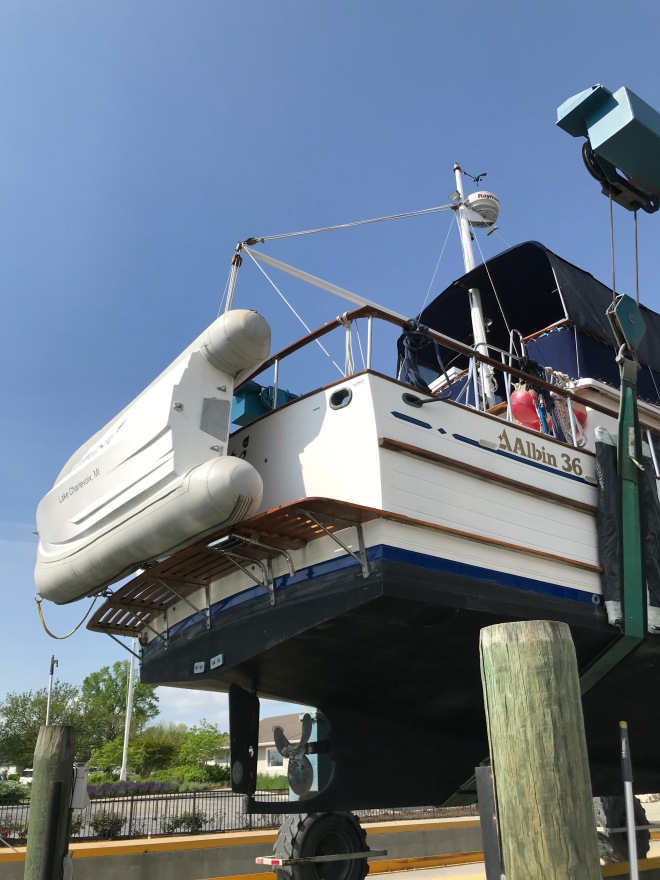 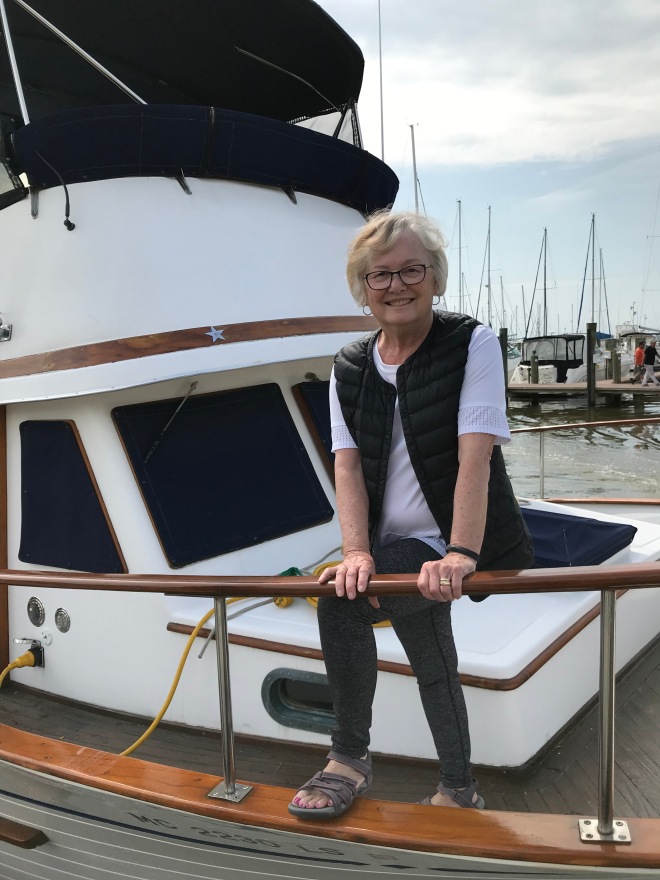 Happily in the water 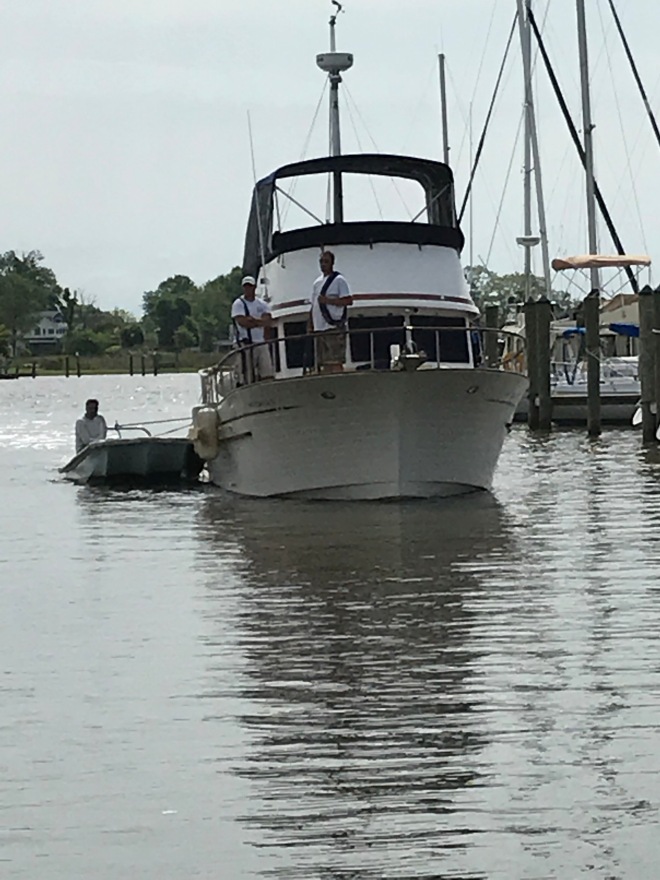 Next, some of the real work begins: get and install propane, flush and fill water tanks, figure out redundancy behind hydraulic steering, change fuel filters, service the 8 batteries onboard all while cleaning, organizing, reorganizing and re-cleaning everything.

Finally, all systems must be tested: the electronics, generator, refrigerator, stove, heads, bikes and remember this is coming from my perspective.  The captain and chief engineer would add detail ad nauseum.

We celebrated my birthday with a car trip across the Annapolis Bay Bridge and along the north eastern shore of the Chesapeake visiting the historic Wye, MD and  having lunch in Chestertown on a sunny/80 degree day. 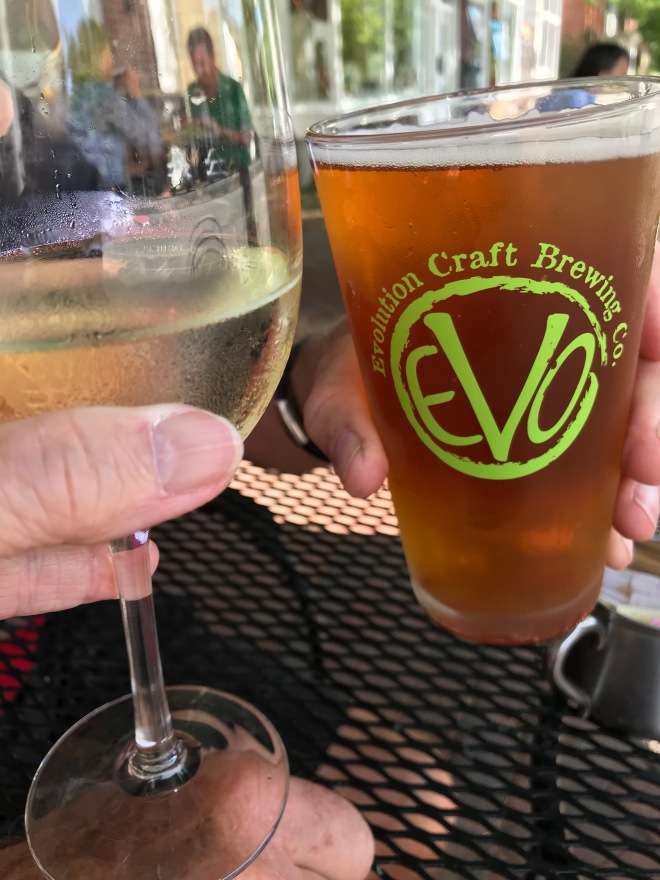 Two days later was Mother’s day and I sadly missed a family brunch at Mike and Veta’s.  Praises to my wonderful daughters-in-law and all mothers and grandmothers for their love, patience and persistence.

“They might be in your living room driving you bonkers. . .

But one day they’ll be out in the world making you proud. 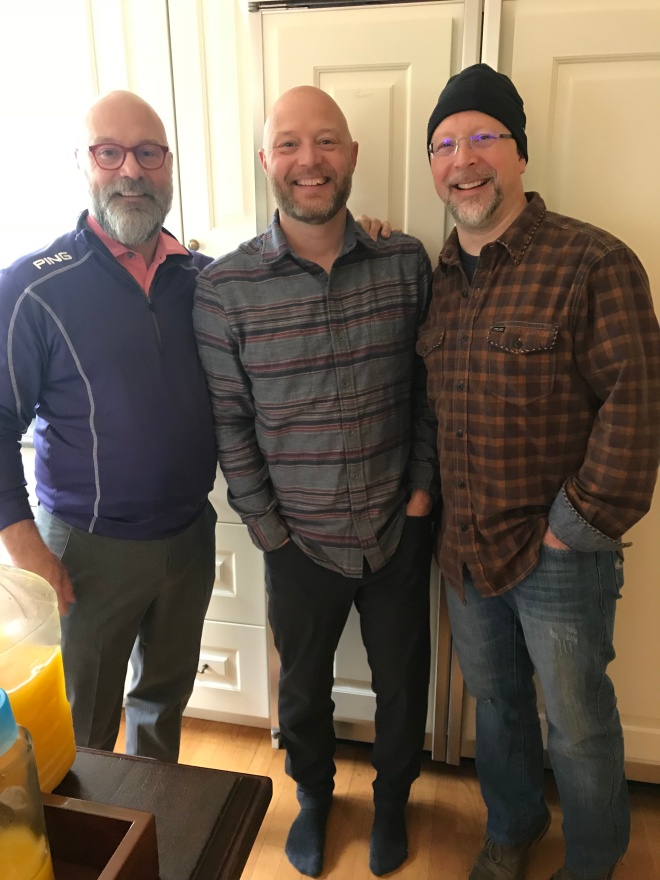 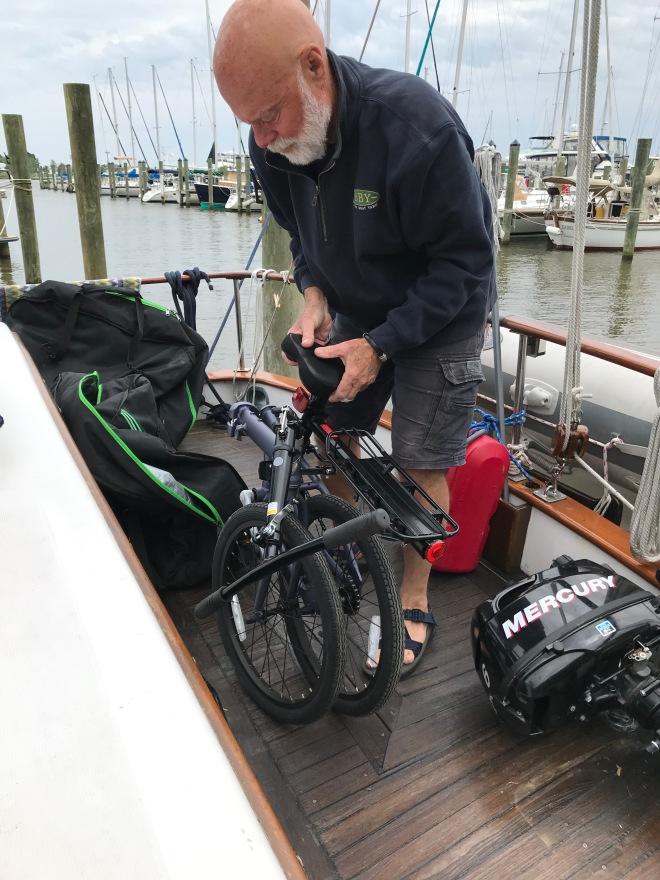 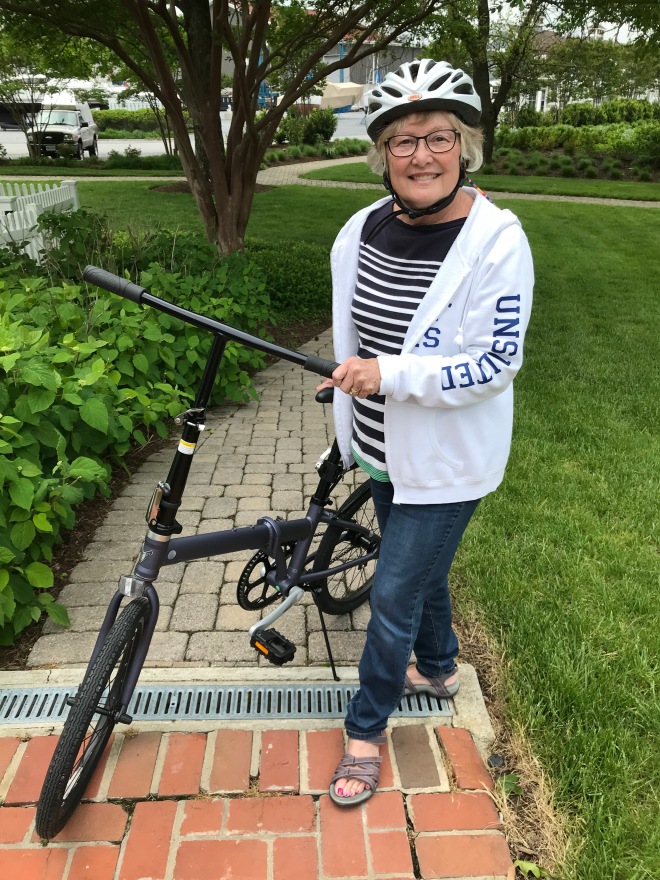 So I wouldn’t feel sad about being away from home we assembled our bikes and took off on an exploratory ride.

On lease expiration day we returned Jim’s car to the local Ford dealer who then drove us the 15 miles back to the Namaste.  We couldn’t have planned it better if we had tried.  We are now car-less and while unsettling at first, we love the freedom of Looping without a car.

Four other Looper boats arrived celebrating with drinks at the Dockside restaurant one night and dock-tales on the Namaste the evening before we left.  At Ease, Peggasus, United 771, and Patriot.  “Til we meet again!” 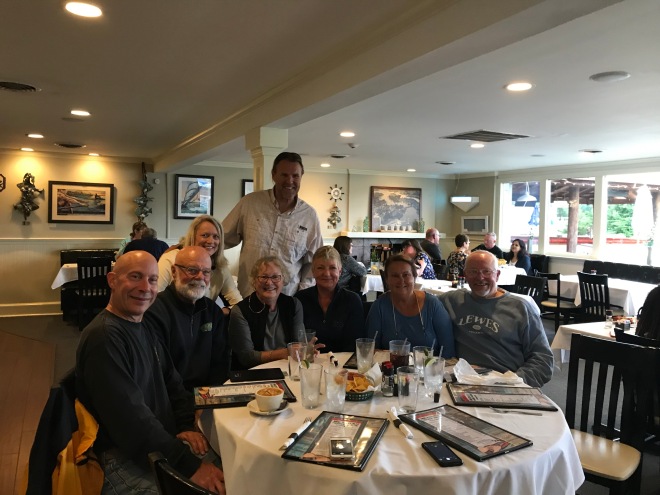 Two of the four boats represented here are just beginning their Loops! 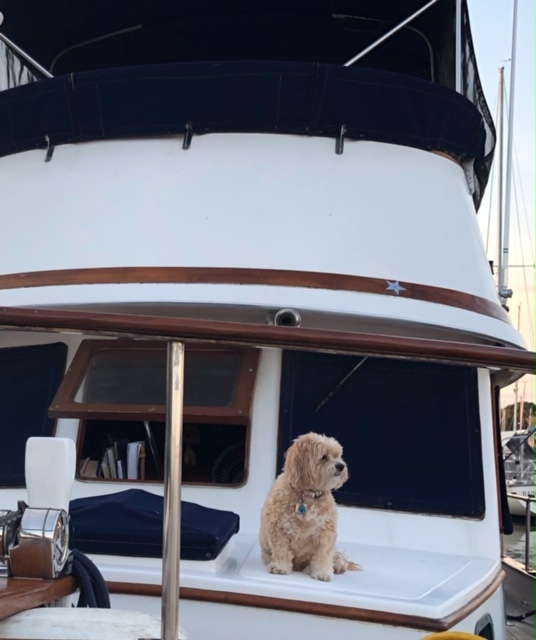 Sammy (above) and Jo Ann (below) waiting to greet our company 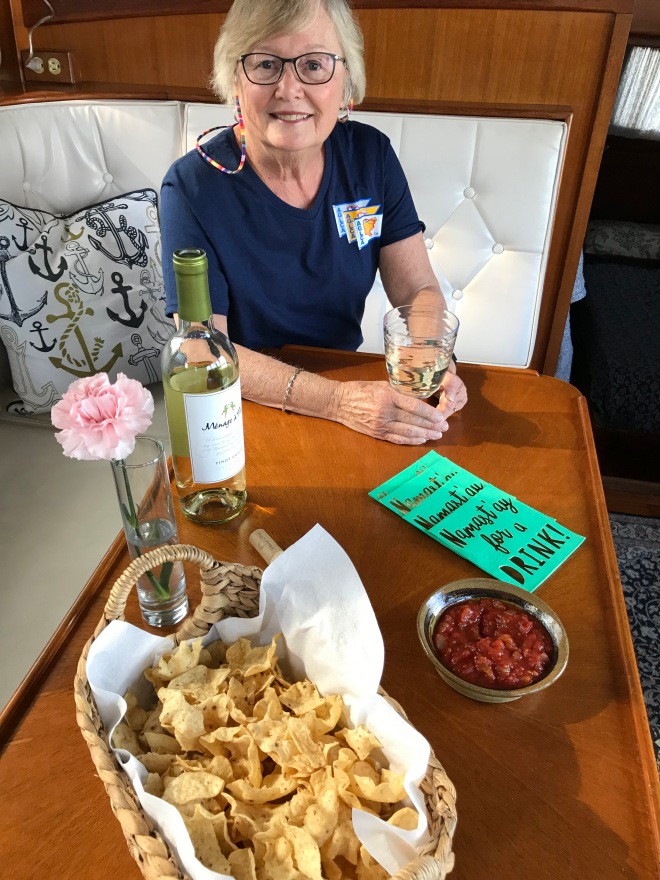 On Thursday, May 16 we departed the lovely Herrington Harbor North marina heading across the Bay for St. Michaels as our shakedown cruise.  This is a wonderful small Chesapeake town in the heart of Mitchener writing country.  Remember the Choptank River?  The recommendations to visit SM were commanding and it did not disappoint.  We traveled and docked (literally) just ahead of United 771. 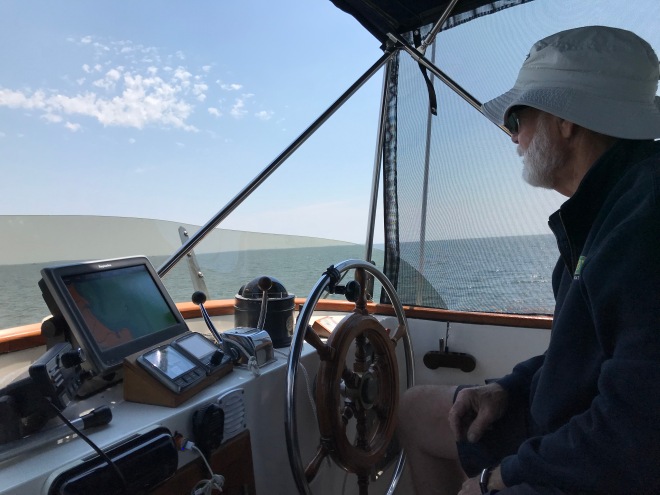 Capatin Jim at the helm.

The St. Michaels town itself and their 18 acre waterfront campus Maritime Museum are the focal points of interest.  It is unlike any other Maritime Museum I have ever seen I’ve seen more than a few!  It was huge but limited its scope to the Chesapeake watermen, an active boat building yard, skip jacks and buy boats, crabbing and oystering, lighthouses, waterfowl, and their hunting dogs.  One impressive visual for me was a large wall map of the waterfowl flyway between northern Canada and Florida – where the various birds get on and get off.  Of the twenty or so species listed, I recognized only a handful and I thought I knew something about birds!  On another note, a 1992 hydroplane was on special exhibit.  Since when is 1992 boat a museum relic?  The Namaste Too was built in 1983. 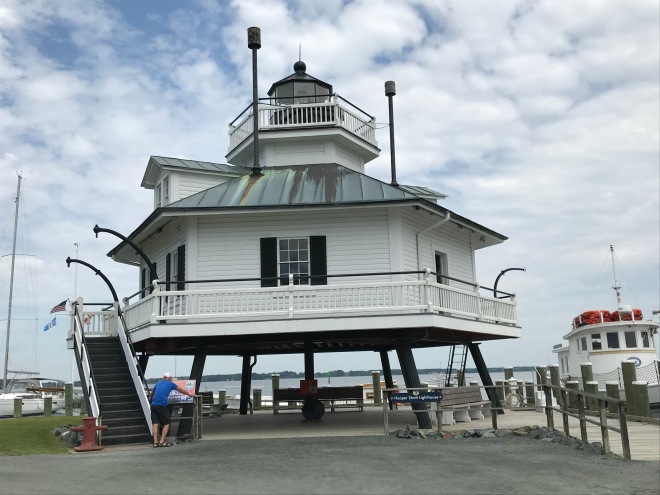 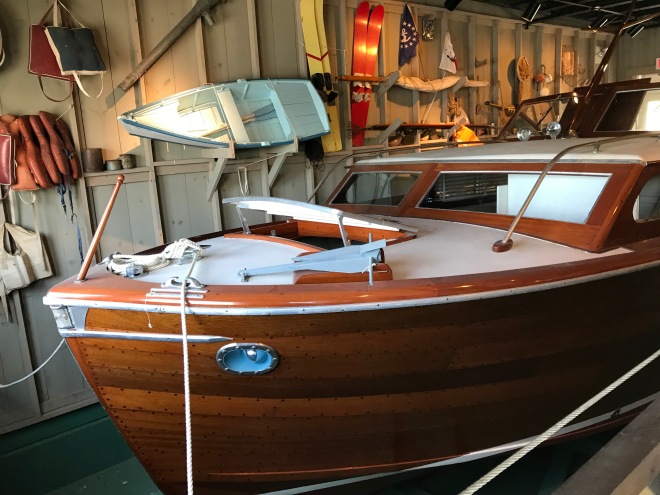 During our tour, an absolute highlight for Jim was meeting the captain of Elf, Rick Carrion, founder of the Classic Yacht Restoration Guild.  Elf is the oldest continuously active racing boat in the US with a glorious racing and cruising history.  Rick purchased her in 1971 when he was 19 and has been racing, cruising and restoring her ever since.  If you are interested google “yacht Elf”.  Jim and Rick became fast friends and would have talked for a week had I not nudged them along so that we could finish the remainder of this great indoor/outdoor, living museum. 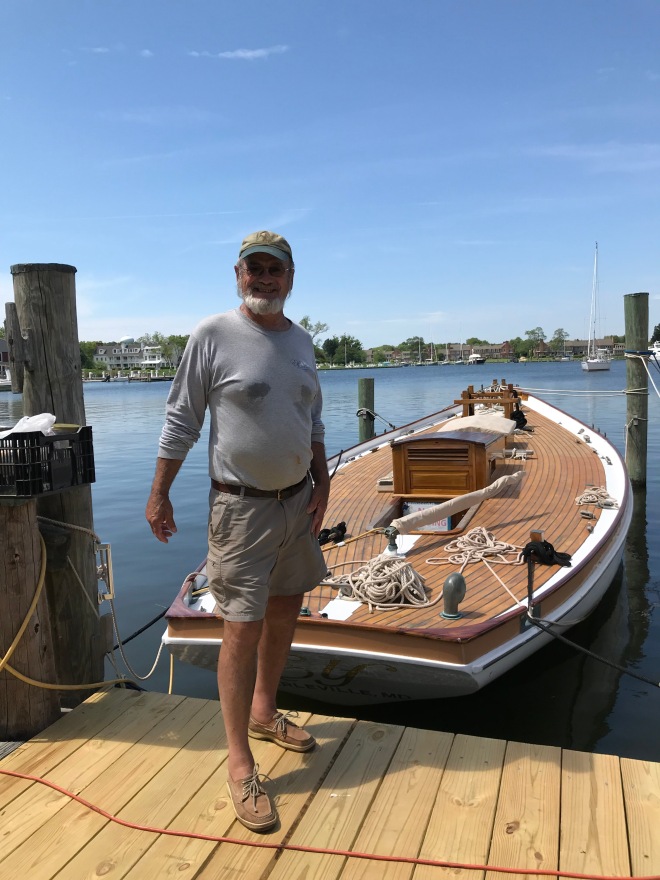 The small town has lots to offer in the way of beautiful really old homes, shops and restaurants.  We had crab stuffed flounder on Friday night with Cathy and Steve of United 771 celebrating my birthday again, complete with a huge piece of chocolate cake.  Bet you are wondering about the United 771 boat name – well, she was a flight attendant and they met on United flight 771 thirty two years ago. 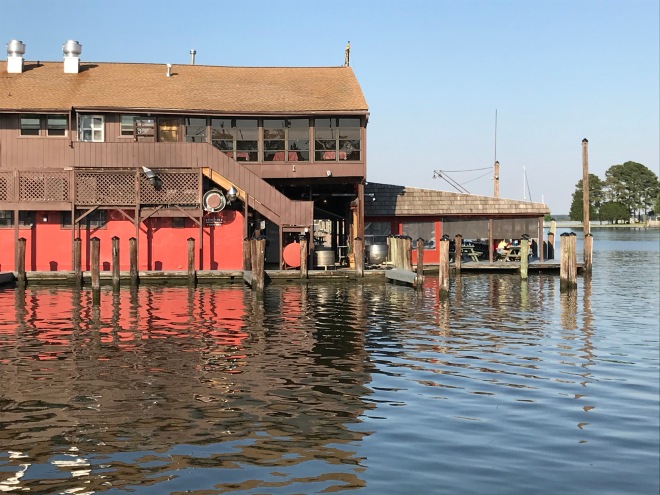 The Crab House restaurant on our way into the Marina 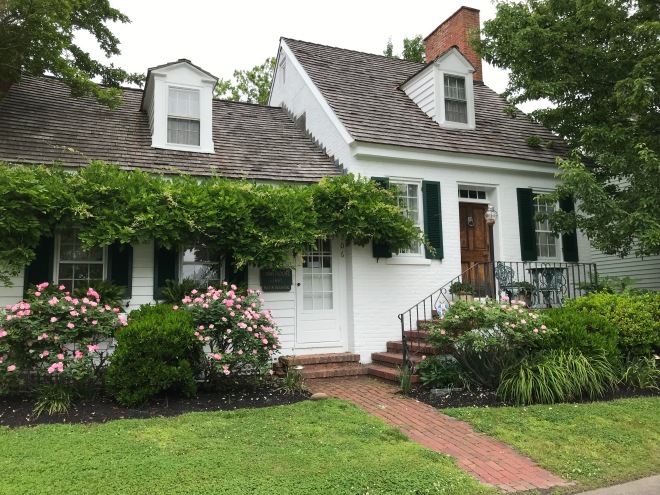 One of the many quaint and meticulous homes in St. Michaels 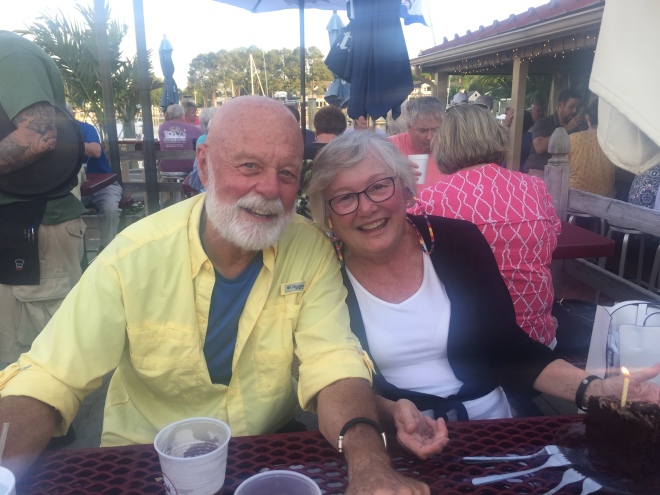 My birthday, again with Steve and Cahy!  Note the large piece of chocolate cake in the lower right of the picture.

We left Saturday morning heading for Rock Hall, MD (about 30 miles).  Word had it that they have a free town dock and since it is early in the season we decided to try for it.  After a spectacular day on the water we pulled into the harbor finding the free dock completely empty with easy access to power!  What a find but then there ain’t no such thing as a free lunch.  Problem was that the winds had begun to pick up, the town dock was directly across from the opening to the harbor which faced south and the origin of the winds.  Add to this lots of boat traffic in the harbor on Saturday and the Namaste was pinned to the wall, rock and rolling as the wind gradually increased over two days.  Sleeping was a problem the first night and impossible for Jim the second night as he was constantly alert to the sounds of trouble – deflated fenders, broken fender boards or even worse, scraping of the boat rails against the dock and posts.  Time to cast off! 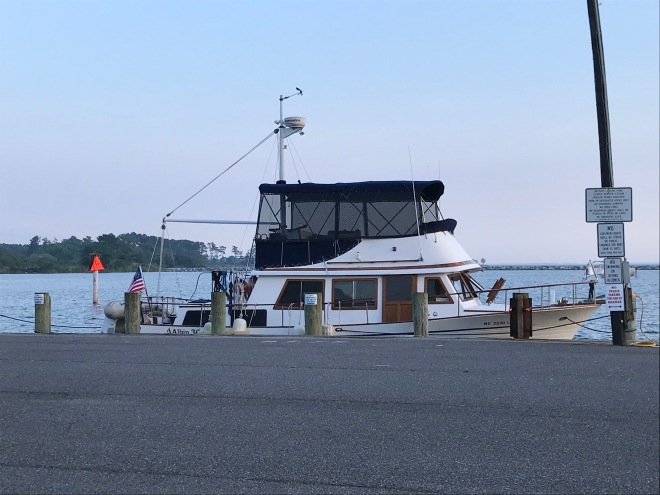 Namaste on the “Free Wall” in Rock Hall 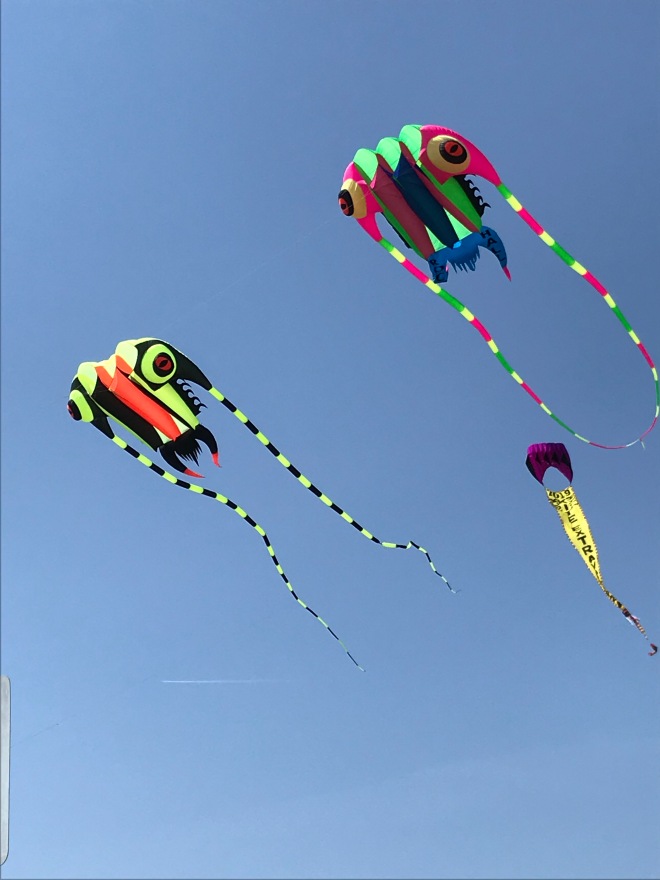 Kite day at the City Park 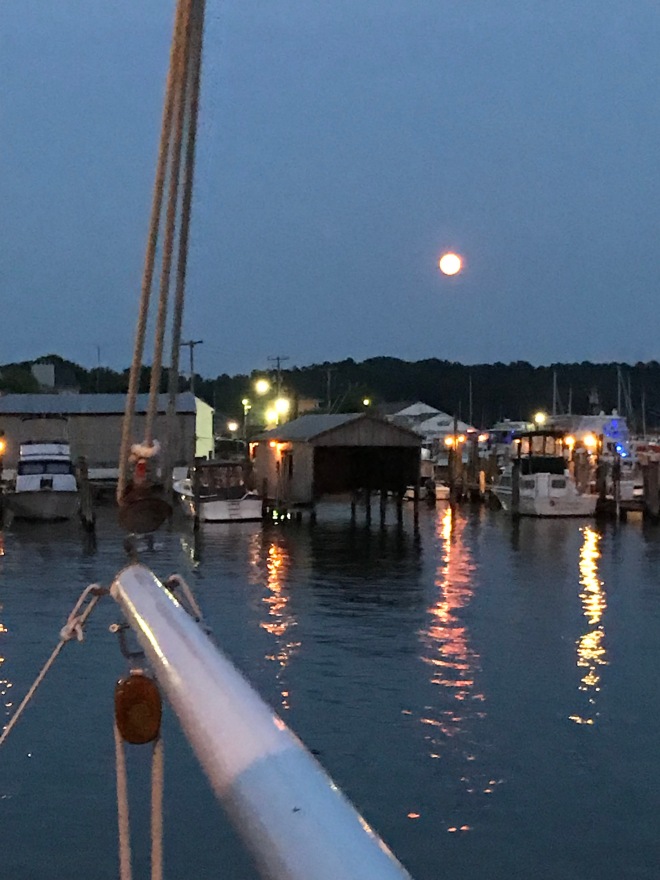 A full and beautiful moon at sunset, before the wind picked up. 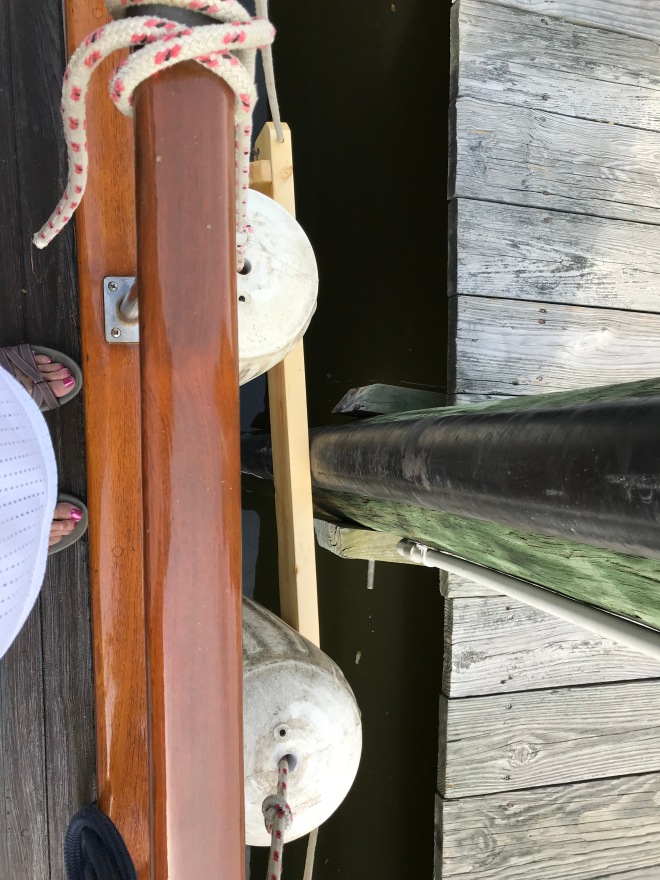 Our new fender boards made by Captain Jim at home.  We wouldn’t have made it without them!  Note the board across the fenders holding us off the post.

On Monday we decided to again cross the bay for Baltimore (25 miles).  This is the largest working harbor on the Chesapeake but we found it to be a quiet Monday morning – one ferryboat, one tug not pulling or pushing anything and a couple of small sailboats.  Once under the Francis Scott Key Bridge we could see Fort McHenry and the Baltimore waterfront.  We headed for the highly recommended inner harbor which again lives up to its billing.  East Harbor Marina is still pre-season so we opted for a great location, water taxi access, floating docks (the best), laundry and great wifi so perhaps I can get this posted. 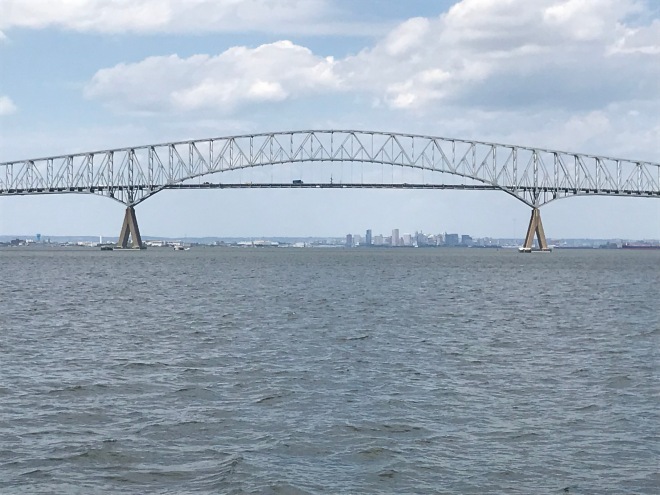 Baltimore skyline from under the Francis Scott Key Bridge. 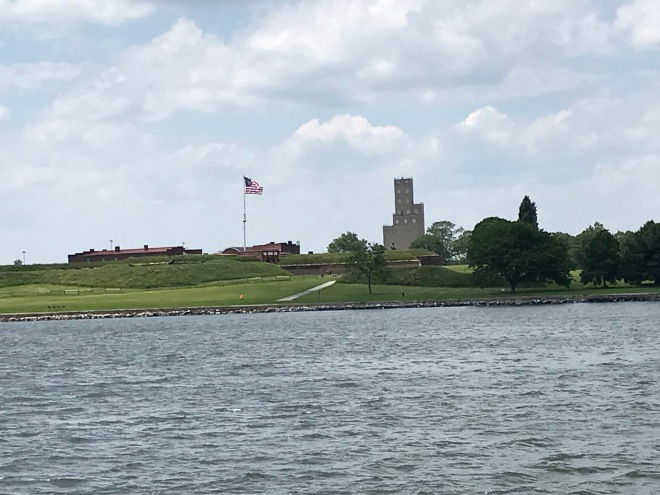 Fort McHenry, the guardian of Baltimore’s Harbor.  This is the site of the successful defense of the city by American forces during the British attack on September 13-14, 1814 which inspired Francis Scott Key to write “The Star Spangled Banner.”  Francis watched the battle as a prisoner on a British ship just behind the battle lines in the Harbor and Baltimore residents watched from their rooftops.  Had America not won this battle, our history could well have been a very different story. 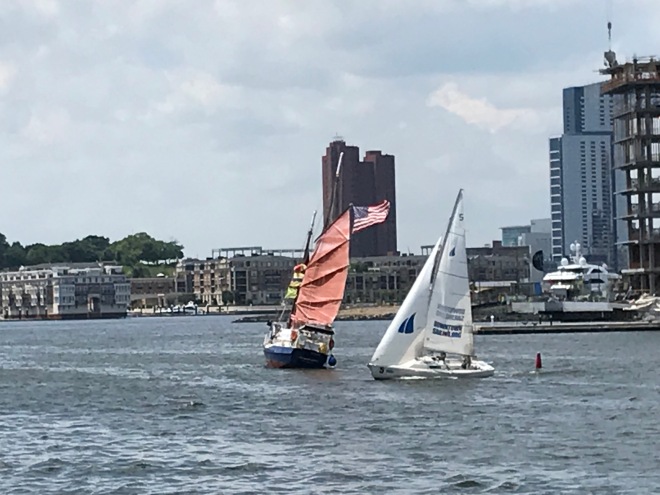 A junk and a sloop playing in the Baltimore Harbor on a Monday morning. 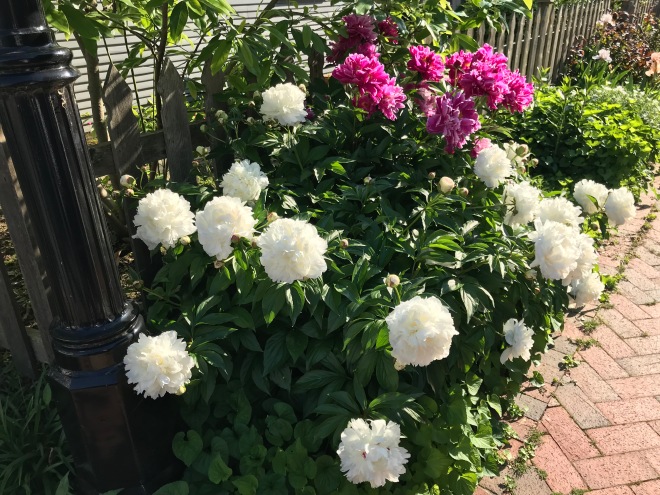 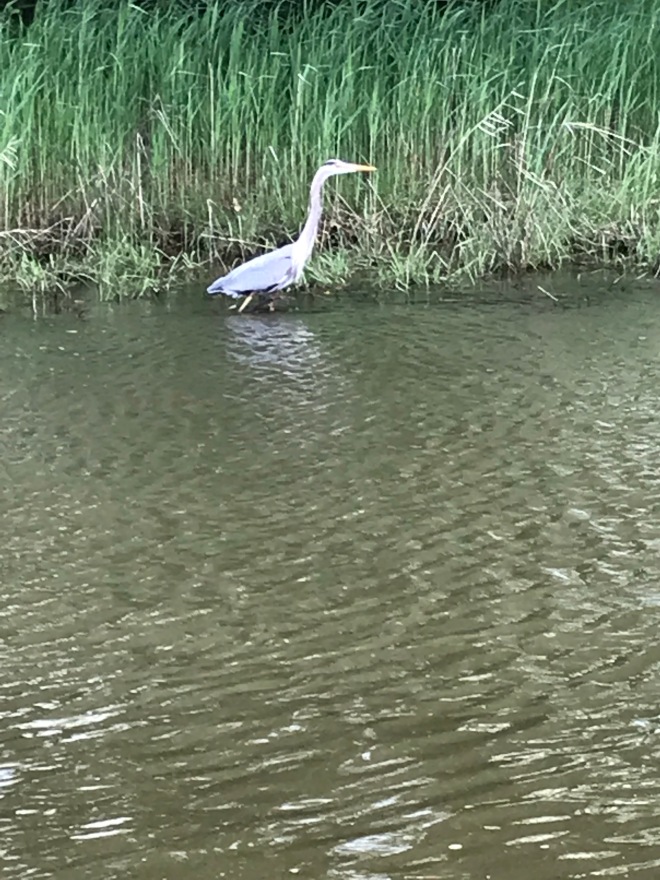 Spring has sprung here on the Chesapeake and nature is at her finest.

As an aside, my experience says that Verizon’s unlimited cellular data is truly not unlimited.  Now they have the “beyond unlimited” plan which doesn’t seem to be working any better but costs even more.  Nothing like good old wifi.  If anyone understands this please call me!

Good Boat Name:  Kissed some Frogs – On a fellow Looper boat here in the harbor.

Bad Boat Name:  I have an observation:  while I will continue to look, the boat names in this part of the country seem slightly less original but also more sophisticated.  It is rare to see a “bad” boat name.

Quote of the Day:  “Time is like a river.  You can’t touch the same water twice, because the flow that has been passed will never pass again.  Enjoy every moment”. -LifeLearnedFeelings

6 thoughts on “THE SHAKE-DOWN HAS SHAKEN DOWN”