Days 133-146; November 8 -November 20.  We left Demopolis Harbor on November 10th to complete the last leg of the Tenn-Tombigbee Waterway or what is known locally as the Black Warrior River.  This was a 208 mile stretch, essentially in the most rural and peaceful territory thus far.  Of the four nights out, there was one marina, Bobby’s Fish Camp (see details below) and three anchorages.  Our new total is 1700 miles traveled since departing Boyne City.

We left Demopolis with 5 other boats in what turned out to be a dense fog.  After a couple of miles of snaking along with the lead boat having radar and AIS (a system to send and receive location signals between boats) we entered the Coffeeville Lock tossing a pound of Biggby Coffee up to the lockmaster.  When the lock opened some 30 feet down, the fog was thicker than soup. New vow: no traveling in the dark or fog but then sometimes it is hard to predict or prevent.  The fog lifted shortly and we were all on our way with the Namaste bringing up the rear.  That night there was not an anchorage deep enough to accommodate us so as an emergency anchorage along with two other slow boats, we anchored  just off the channel behind the column of the AL State Highway 10 Bridge.  The idea here is that a barge or other boat would have to go through this enormous cement column in order to hit us.  It was a surprisingly quiet stop.

The next night was spent at Bobby’s Fish Camp founded in 1956 with few updates.  It was a place to tie up or I should say raft off.  We were the third boat away from the 100′ dock which actually housed seven boats that night with their record being 14 boats.  In other words about 300 feet of boat (think football field) tied to 100 feet of dock.  The good news was that they had diesel fuel, a catfish (not seafood) restaurant and really fun/nice people.  The bad news was that there was no shore power or internet access and the only shower didn’t have a lock.  Everyone said Bobby’s is to be experienced but then the seasoned Loopers seemed to just keep moving on.  We left at daybreak in a wistful pink fog that cleared immediately to allow for the family text message stream that lasted from 3 a.m. until 1:17 p.m. on November 13th when Cedar Curtis McFall was born to Curt, Brooke and Leonie making them a family of four.  Cedar weighed 9/2 and everything is perfect.

Just after the birth we dropped anchor at Three Rivers Lake.  We had all the vital baby information but had not yet talked to Curt and Brooke.  Picture us running around in the dinghy with the iphone in the air trying to get a signal.  Eventually we spoke with Curt for a minute or two but had no more contact until the next morning when we were back on the main river.  The phone then pinged on and on with information and pictures.  Jo Ann was so engrossed with grandchildren that she managed very little helm duty all day.  Today (14th) was also Ashleigh’s 14th birthday and as she and I were chattin on the phone, I got eye contact with my very first Pelican sitting on a green channel marker no more than 20 feet away.  He was surely wishing Ash a Happy Birthday too!

The final night out was spent in the Alabama Bayou!  We anchored with no real choice but knowing that the prospect of getting Sammy to shore would be marginal it was marshland as far as the eye could see.  Well, we pulled into the tiny piece of water to find a shack and dock waiting for us.  Jim cautiously went ashore (a gun was leaning nearby against a tree) to ask if Sammy might use the dock to get to solid land.  He agreed, we thanked him with a pound of coffee and he responded by finding the Biggby website to send a comment to Mike telling him the story!

The next morning was our last on the Rivers.  It was a short 16 miles to Mobile early on a gorgeous Sunday morning.  After a difficult upanchor on the Sea to See,  we motored through downtown Mobile with almost no boat traffic and proceeded out into the extremely shallow and choppy Mobile Bay.  It was sad to leave the calm, peaceful rivers to which we have become most comfortable but also feel ready to move on to the challenges of the Gulf – saltwater and tides.

With Jim singing “The Shrimp Boats are a Comin. . .” we meticulously followed the narrow channel to Dog River and the Turner Marina where our sails and masts had been shipped and where we would have them stepped once again.  Windy, wet weather caused a two day delay in getting the masts up but we entertained ourselves with a girls shopping and spa day (thanks Mike and Veta), a movie and several dinners out!  The restepping process went perfectly and today (November 20th and Leonie’s 3rd birthday) the Namaste has her clothes back on and is officially again  a sailboat. A big shout out to Christy and Roger at Turner Marina!

Boat Name of the Day:  Norde Gaest taken from a Scandinavian folk character who never gets old as long as he is traveling!

Bad Boat Name of the Day:  Red Nec – nothing more to say!

The White Cliffs of Epes.  These trees have an enormous will to live!

Dinner on the deck in Demopolis. . . 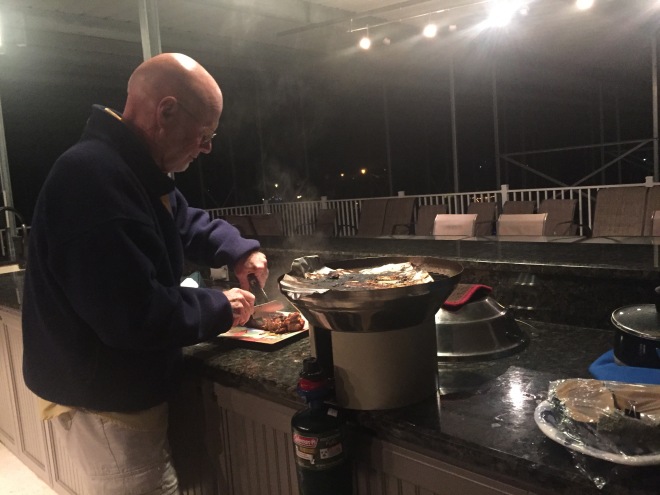 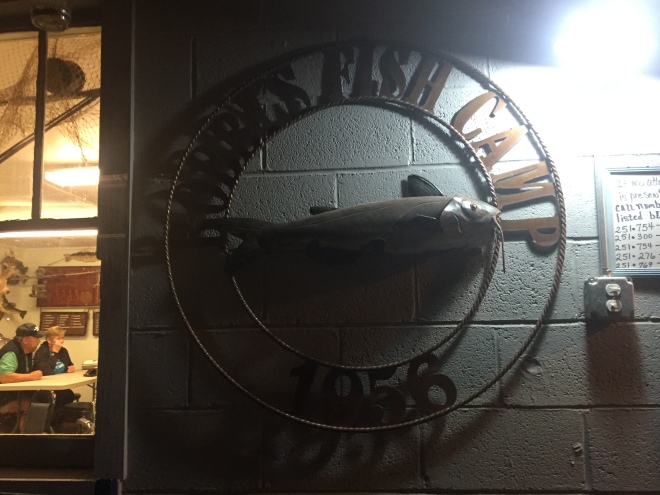 Bobby’s Fish Camp Logo.  Yep, that is Vickie and Ron inside the widow. 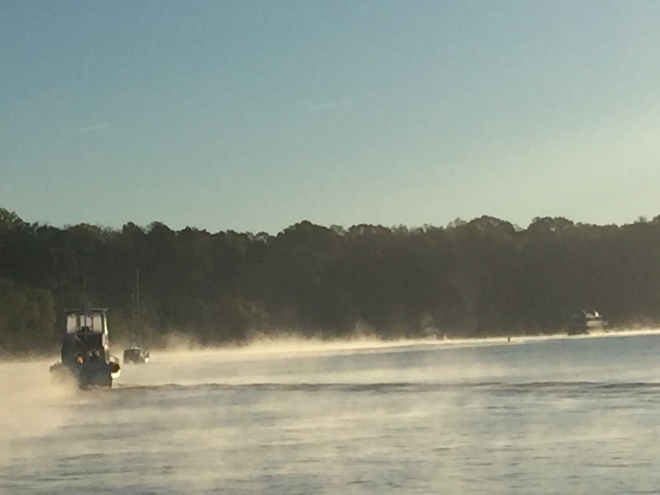 Leaving Bobby’s in the wistful fog! 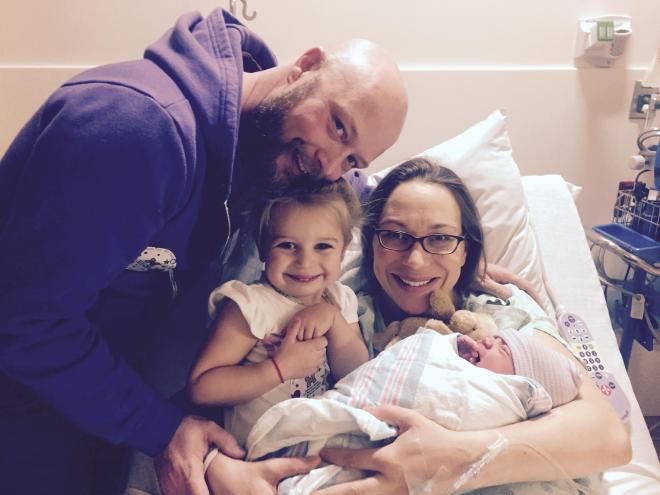 This is the Alabama Bayou!  Where in the world will Sammy go potty?

Grandma couldn’t be there for births and birthdays but she made cookies and muffins.

This tree is covered with what we think is Spanish Moss.  Apparently the Moss is not a parasite to the tree but rather gets water from the air making it more a tree decoration. 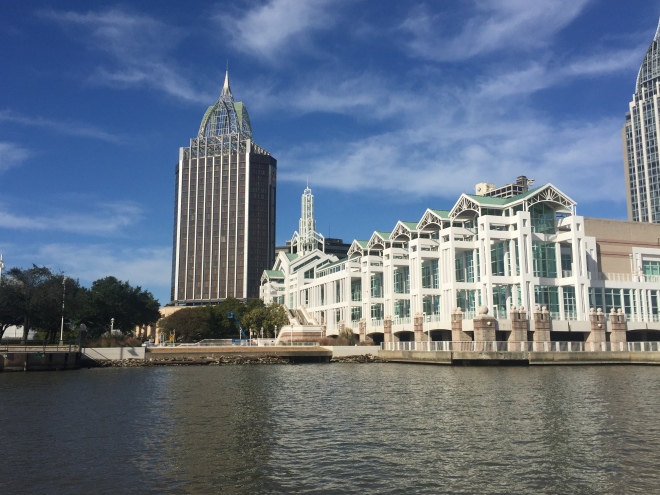 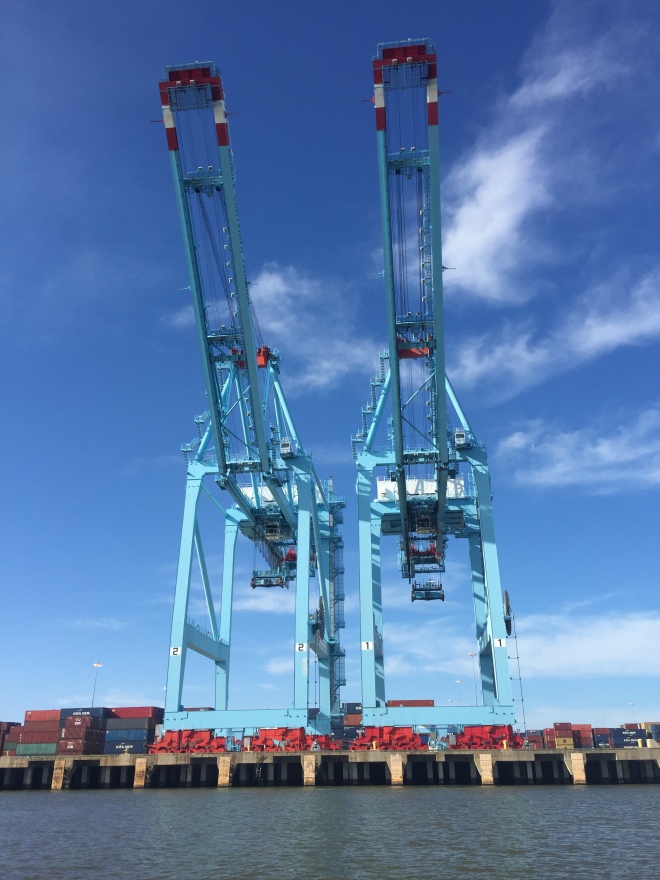 A pair of southern city giraffes! 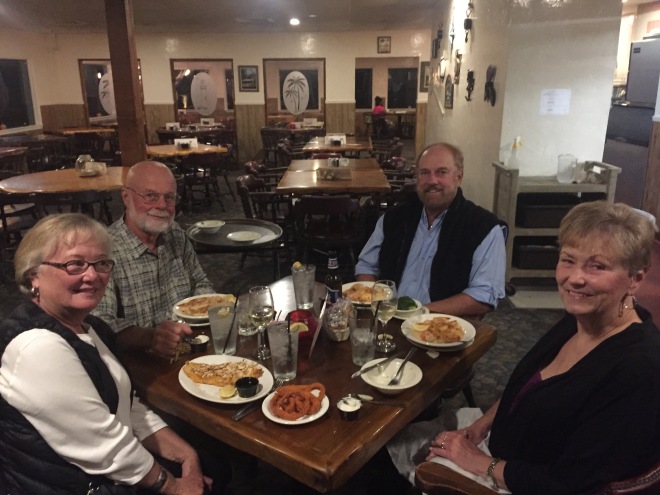 Dinner accessed by dinghy at the Grand Mariner across the river from Turner Marina.

Girls day shopping in upscale Fairhope and then off to the Spa. 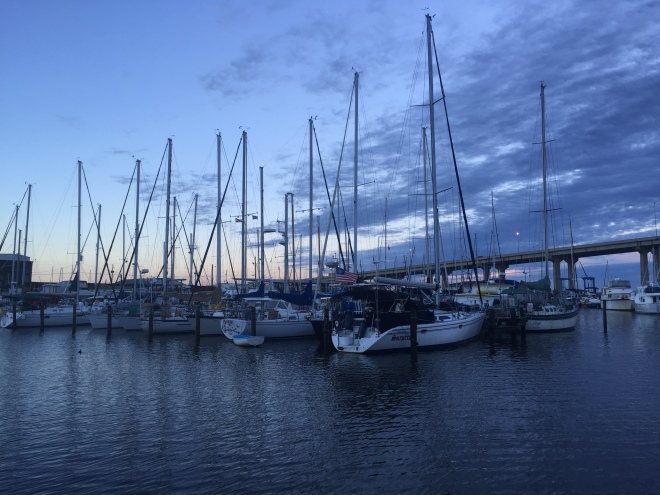 Just before sunrise on a long walk with Sammy. 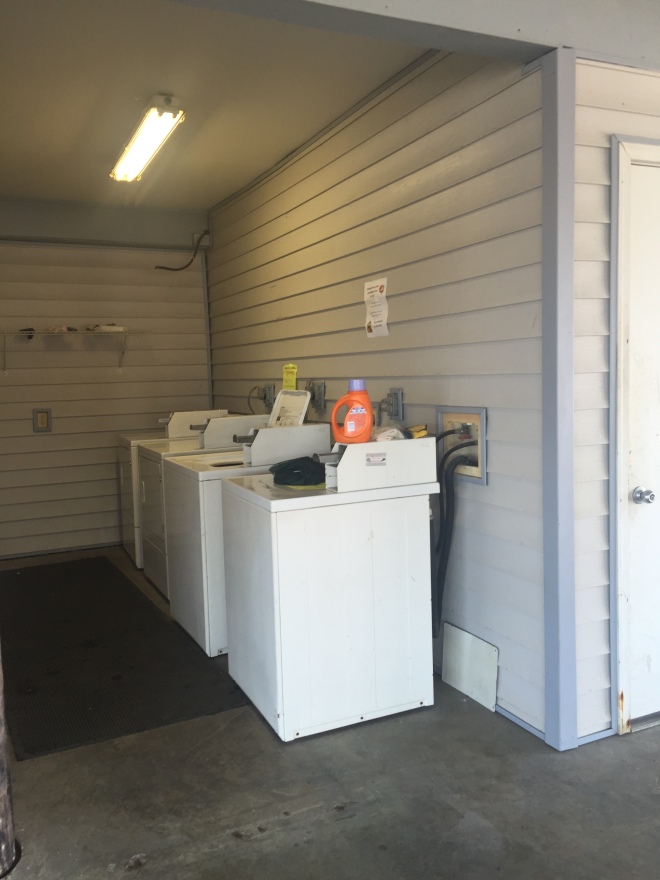 We must be in the South!  Laundry is in an outside nook.

3 thoughts on “Demopolis to Mobile: the End of the Rivers and the Beginning of Cedar”