Our initial four day stay at Faro Blanco concluded when we were informed that we must vacate our slip by Thursday as a 60 plus go-fast-boat rendezvous had reservations for the weekend.  This was a major headache for us and the dock staff but I suspect lucrative for the resort.  We, along with several other boats headed out into the Florida Gulf for various destinations.  We decided to literally move across the street which necessitated traveling 15 miles out, under the Seven-Mile bridge and back into the Marathon City Marina between Vaca and Boot Keys with little rain squalls all about.  Nothing dangerous and we didn’t even get wet!

One of several squalls but fortunately moving away from us!

This marina/basin consists of 200+ mooring balls with room for safe anchorages as well.  Since all the mooring balls were taken and there was a waiting list, we hunted for and finally found a good anchorage, closest to the marina dock where we could tie up our dinghy for $22/day.  Additionally, this fee included a boater’s lounge with TVs available on a first-come-first-serve basis; a large leave one/take one library; rest rooms; boat work room; showers; laundry at $3/load to wash and $3/load to dry (we are paying for water here); a huge bike rack, the city recreation area for baseball, soccer, small concerts, etc; and the Marathon Detention Center.

Dinghy Dock at Boot Key – not always this calm!

There were several interesting things about our stay here.  First, this anchorage is where Curt lived on a sailboat after college (approximately 2002-2004) while he taught for the Colgate Offshore Sailing School here in the Keys.  We visited him once and stayed on his boat but living here as he did fifteen years ago provided us with a better sense of his experience.  This basin full of boats is a community of diverse folks from those just getting by who would likely be homeless in Michigan to those who are working a couple of jobs and enjoying the Keys lifestyle to those doing the loop and those cruising in million dollar boats.  There is a VHF radio network that broadcasts every morning at 9 am with the news and events of the day.  There are a few rules such as don’t anchor too close to the next guy; have a light on your dinghy and go slowly at night  but otherwise everyone seems to look out for and get along with everyone else, much like an old fashioned neighborhood where people live outside.

Boot Key Community by night  (anchor lights are a requirement)

Two boats of particular interest included one quite nearby with a pit-bull aboard who spent his day barking at passers-by and longingly searching for his owner’s dinghy to return.  The first 24 hours we never saw the owner and I was getting ready to take him/her some of Sammy’s food when Jim wondered aloud how I thought I might get a plate onto the deck without losing a hand.  I decided s/he didn’t look all that hungry.   In the end, however, a young woman returned with hugs and wild celebration.  My made-up story is that she works long hours and has the dog on the boat for protection which works for them both.  The second interesting boat was a very large catamaran sailboat owned, I am certain, by a hoarder!  I have never seen so much stuff stacked on, tied to, hanging from this boat with literally no room for people.  Looks as if s/he has been there since before Curt.  We also knew the folks on three nearby boats – two from last year (Elizabear and Nordguest) and new friends we met at the Bahama meeting (Blue Moon) who aren’t leaving yet either due to insurance concerns. 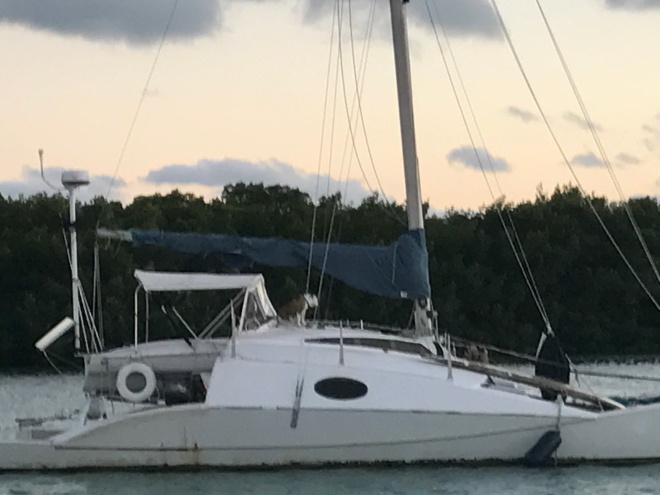 Note our adopted Pit Bull – on watch at the center of the picture, sitting on top of the deck just under the boom

We stayed three nights on the hook enjoying beautiful sunrises and sunsets interrupted by calm and beautiful days before heading back to the Faro Blanco resort. 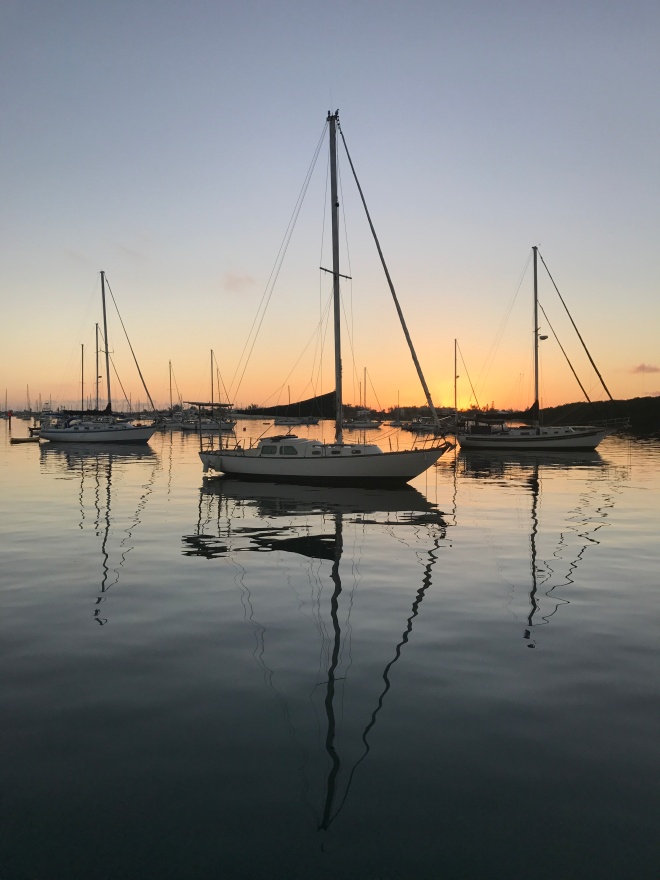 Sunrise and one of my favorite pictures this year 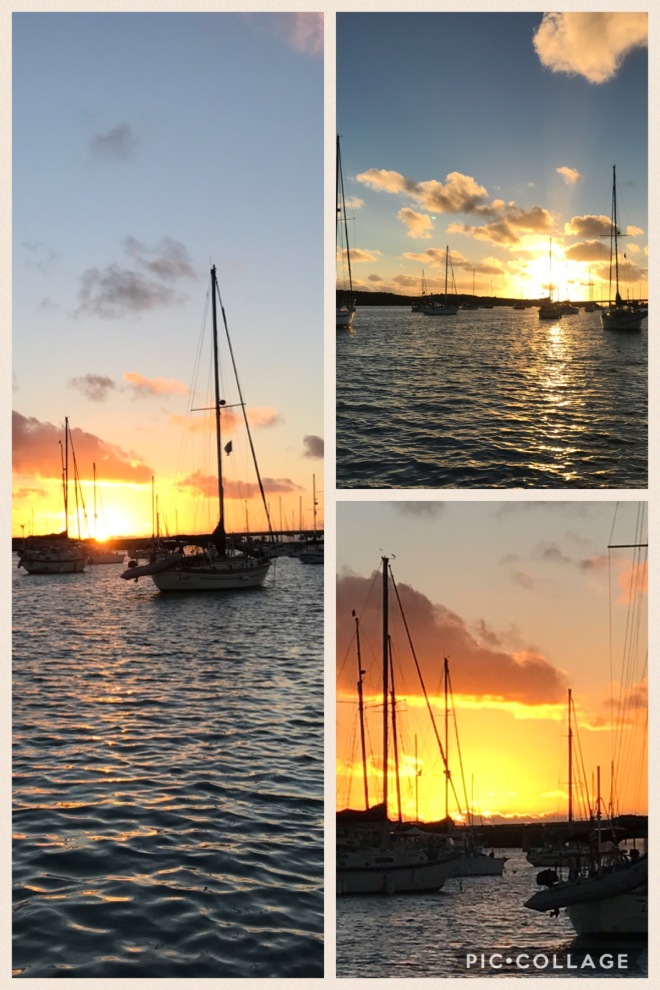 Sunsets (we see more of these)

Since we aren’t going to the Bahamas and because it is a good deal, we decided to contract with Faro Blanco for a month stay here where the amenities are many and the worries few.  Nightly fees are $4/foot/night while monthly rates are $1.50/foot/night which is comparable to marinas on Lake Michigan during summer.  No brainer!

Ev and Clark aboard Sunset Delight (see previous posts) are here along with Jeanne and Kenny aboard Daybreak and Anne and Mel aboard Morningstar – all friends from last year.  There are many new friends, both Loopers as well as cruisers including Rich and Paula next door aboard Blue Heaven from Ionia/Saugatuck who are still working in Michigan and love their local Biggby Cafe.  We happily supplied them with a pound of home grown coffee. 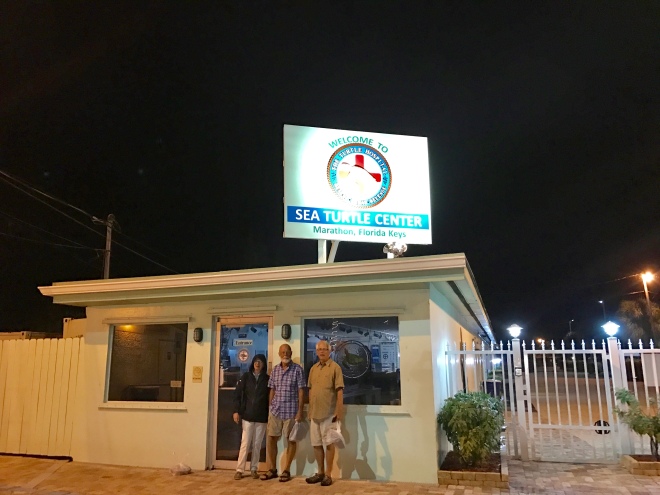 Caught in a downpour on the way back to the boat with Jeanne and Kenny  Note: we are at the sea turtle hospital 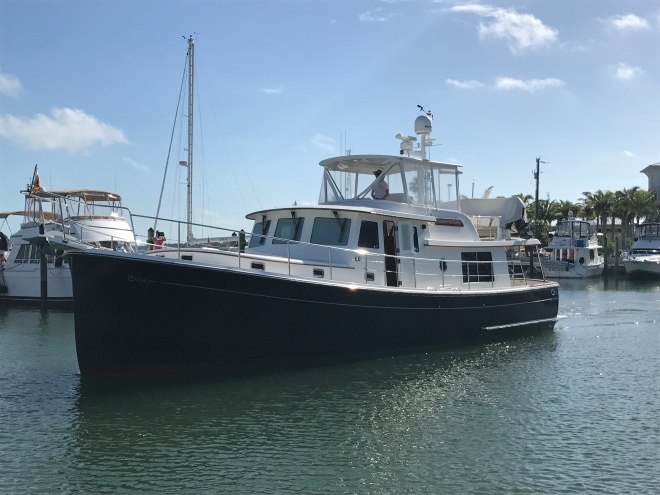 Sadly, Ev and Clark leave on the Sunset Delight to head back north to New Jersey and home.  The good byes are hard!

Kenny, the birthday boy with Jeanne and us.  One fine dinner!

Sammy Says:  Hi everyone, I sure do miss you-especially Gio, Gillie, Mellow and Brutie!  I haven’t yet met my new relative Nia but miss her too.  My human and extended family here are good to me except for the not so small issue that they won’t let me leave the boat by myself.  I know this place well from last year and there are lots of people to greet and dogs to sniff.  Seems everyone has treats so whatever is their problem?  Anyway, they did get me a good haircut the other day, a relief from the heat and the humidity which we traded yesterday for winds of 25-40 mph. So now the Namaste rocks and rolls all day and night with strange noises and occasional shutters which make me anxious – who knows what could happen – see below.  Anyway, last night Jo Ann was nice enough to sleep with me curled up next to her in the main salon.  I’ll keep you posted about the freedom thing! 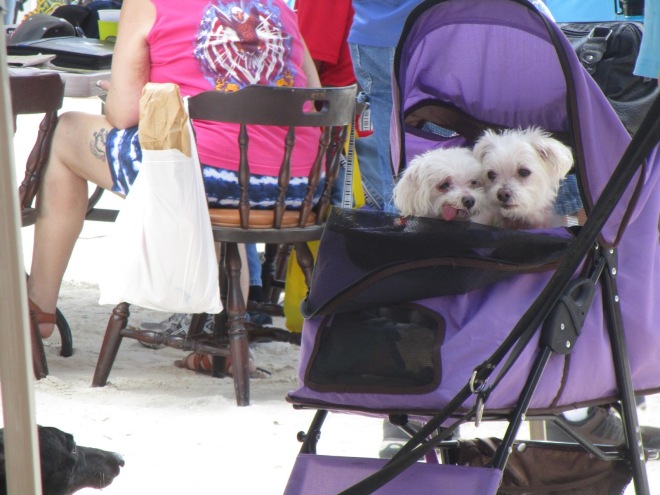 Look at this would you!  It is really hot here at the Flea Market and I am so jealous of these guys. 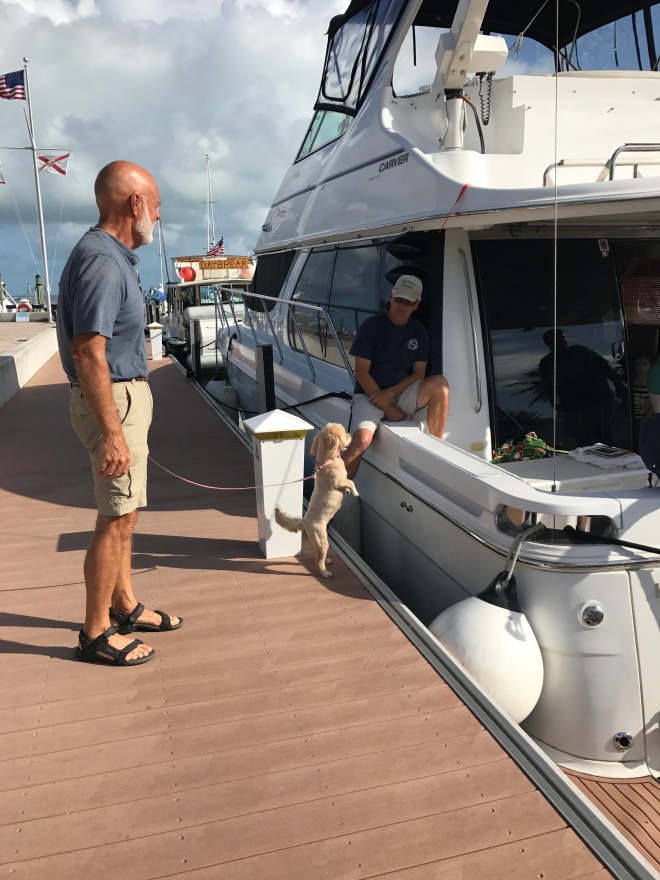 Addendum:  A true boat angel story! We learned this morning that Michigan Looping friends had a terrible fright with a happy ending last night!  They are in the Bahamas (ELeuthera) on a mooring all.  While they were off the boat having dinner with friends and in the same 25-40 mph winds and 8 foot waves we’re having here in the keys, their boat broke loose from its mooring ball and drifted 4 miles out to sea with their Daisy Dog and Sammy’s friend, Molly aboard.  After dinner as they tried to return to their boat by dinghy in the dark they realized the boat was GONE but luckily they could see lights far out at sea.  The authorities would not help until daybreak since no human life was in danger but a wonderful local boater ferried the captain who somehow boarded his boat in violent seas, got the boat started and brought it and Molly back to safety.  I tell you this story only because I am feeling so very grateful and happy for their bravery and safety today.  A special thanks to the local boat captain and to the friends traveling with them for their caring support.

As I sit in the boater’s lounge here at Faro Blanco watching the waves crash over the break-wall, I am reminded of the times sitting at Johnson’s Marina in Frankfort waiting for a weather window to return to Boyne City.  The difference is today I’m posting to a blog instead of matching students to social work liaison assignments!

Good boat name of the day:  Living Life (a 27 foot Looping sailboat from Peterborough, Ontario carrying a family of four including Lucas 10 and Marcus 8.  See Lucas’ u-tube video about the loop:  https://youtu.be/XmYGFY27VGI )

Quote of the day:  “If you are more fortunate than others, build a longer table, not a taller fence.”   -Canadian Memorial Center for Peace