Ashleigh (16) arrived on Thursday evening to spend the last of her spring break with us in Charleston – we couldn’t have been more honored.  We Ubered to the airport in more than plenty of time to gather our wonderful granddaughter who had driven her Grandma Ollie and herself to the Detroit airport, parked the car, checked in, changed planes in Charlotte and arrived to us full of smiles.  Back to the boat, Ash got settled in the v-berth and forward head. We were tired so all went to sleep early but not before what was to be a quick dinner in the Reel Bar.  Well, this turned out to be a ghastly restaurant/meal experience.  All orders were wrong, it took two hours to get our food and it was so noisy that we gave up talking.  Turns out an already “happy” wedding party entered the bar just as we placed our order and the two bartenders could not keep up with the party drink needs much less deliver our food.   Without even a verbal complaint and well received by us, the manic waiter waived our bill.

The v-berth all ready for Ashleigh

We decided to spend our first day at the resort pool as this was to be our best weather of the weekend – 75 and sunny.  We relaxed as we talked about school, hockey, skiing, shared past vacations, and Wednesday evenings gone by; read; and walked the nearby beach looking for crabs and finding washed-up jellyfish.

Ahhhhh, this is what I needed!

As promised we woke up to a cloudy Saturday and since the rain forecast was delayed until mid-afternoon, we took a nearby water-taxi the half mile across the Harbor to the Charleston Aquarium – a splendid display of the saltwater wildlife of South Carolina.  Between beach exploration the day before and this aquarium, we truly came to understand Ashleigh’s young adult expertise and childhood passion for all animals – today it happened to be fish, fowl, and reptiles.  Her dream is to be a vet for unusual/exotic animals and she is well on her way to making that happen.  We then lunched at the East Bay Deli, the best deli in Charleston before taking a wet water-taxi ride back to the marina and an even wetter walk down the long docks to the Namaste.  I cannot remember the last time I was drenched to the bone!  Thanks to Jenny Lynn and Dan for the invitation to late afternoon snacks which turned out to be our dinner. 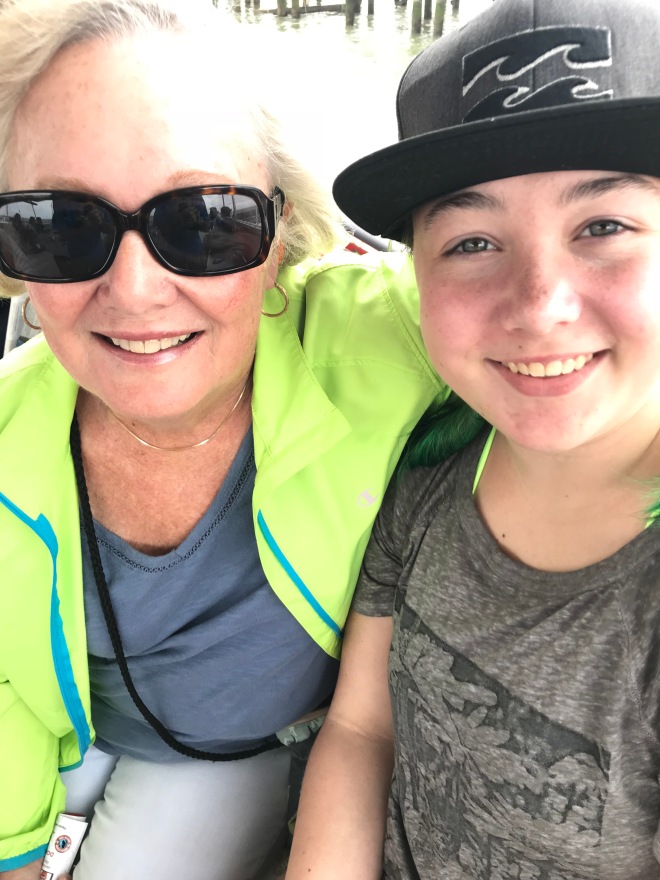 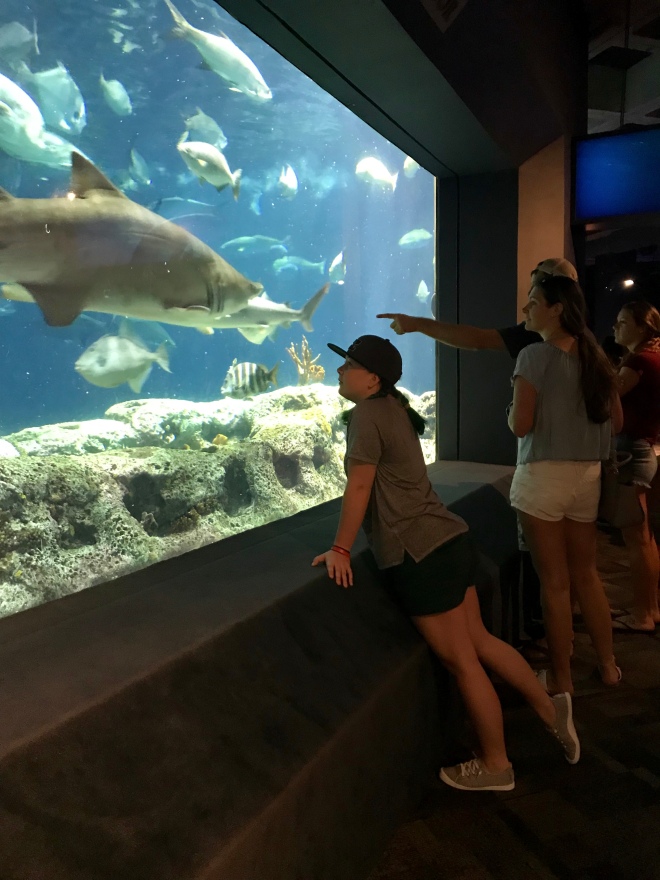 Sunday was sunny but cold and windy so we took the hotel shuttle into downtown Charleston where we shopped the market and watched the Gullah ladies making seagrass baskets (see below).  We lingered over the masks, metal figurines and jewelry before setting out on a long walk through the old homes, churches and shops of the South of Broad Neighborhood (the Pat Conroy book of the same name is highly recommended) and then along the South and East Batteries of this charming city.  Ultimately, we lunched at a lovely little café in the French Quarter, hopped back on the shuttle and luxuriated in the hotel hot tub the rest of the afternoon. 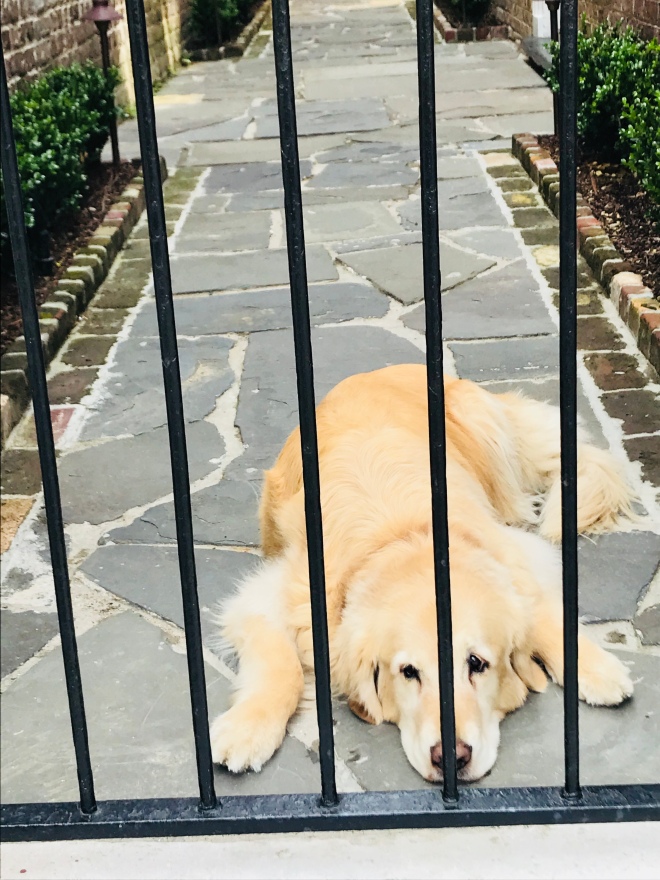 But you said you would bring Sammy. . .

Grandpa and Granddaughter in deep conversation 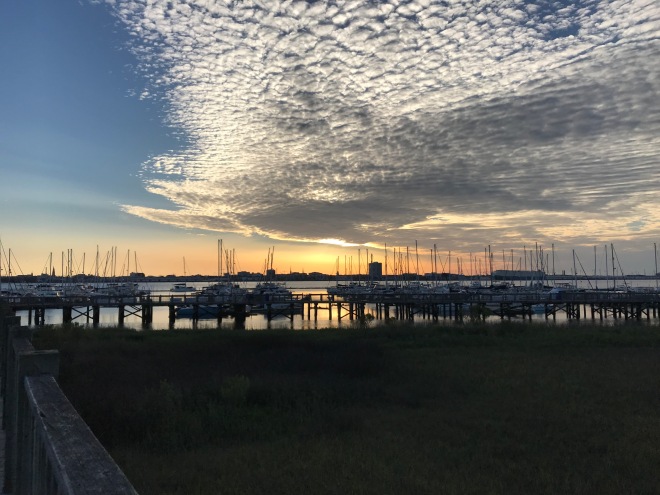 Monday arrived too quickly and it was time for Ash to head back to the airport and home.  We enjoyed a breakfast buffet at the resort Fish House, grabbed an Uber, watched her navigate the airport and that fast, she was gone.  It has been quiet and a bit lonely for us all including Sammy who relished in Ash’s loving attention. 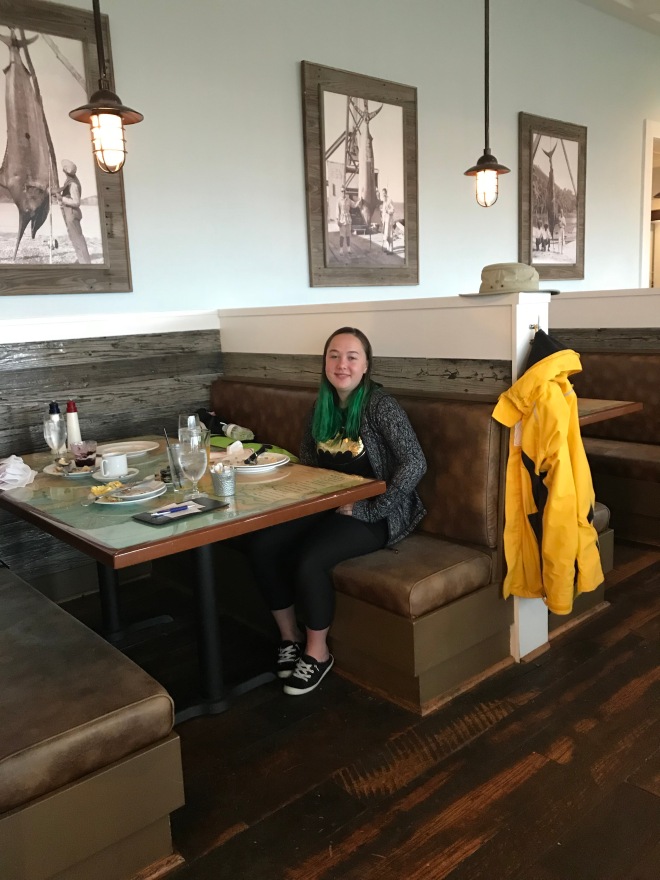 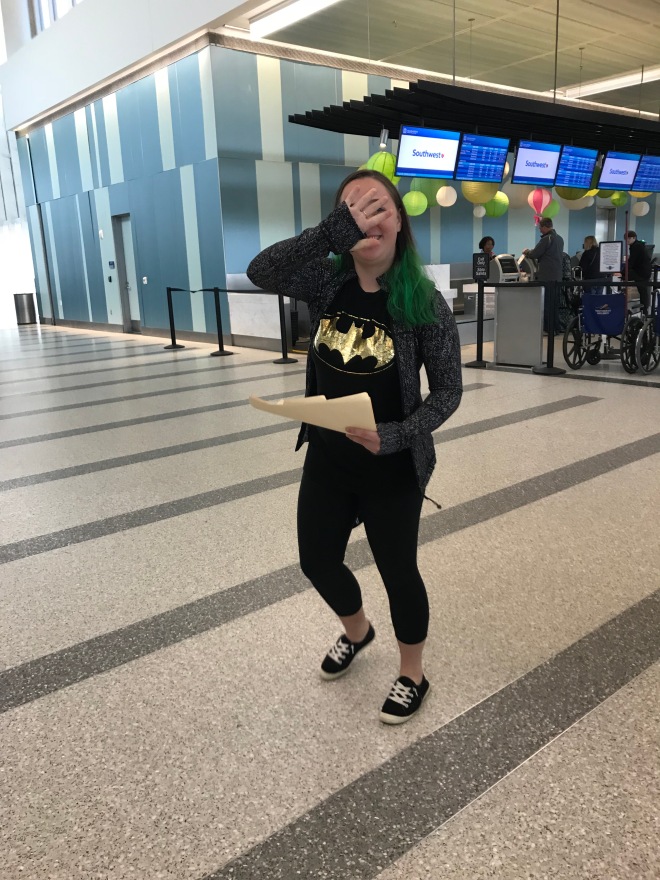 Jim and I spent the rainy afternoon touring the World War II aircraft carrier, destroyer and submarine on display at the end of our dock and in which Ash had politely and respectfully declined any interest (good choice).  We enjoyed seeing a real Corsair airplane upon which Jim’s dad had been a mechanic when he served on one of these enormous carriers but the experience was overwhelming and the ambience added to our overall sadness of Ashleigh’s departure. For the first time on this leg of our Loop we admitted to one another that it would be nice to be at home today but also knowing that tomorrow will be another day! 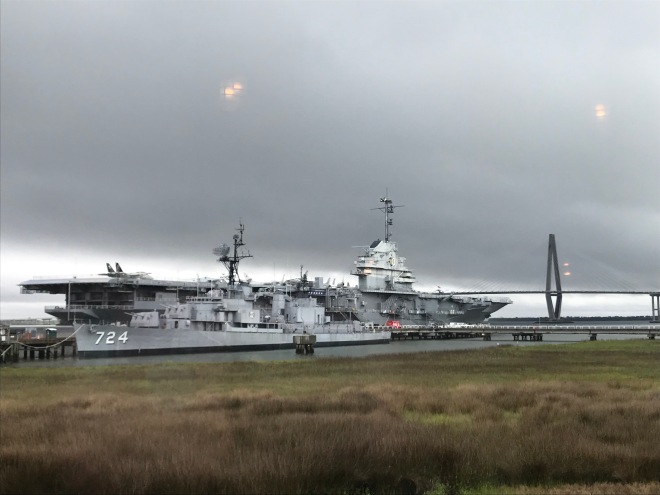 Corsair that Jim’s Dad worked on during WWII 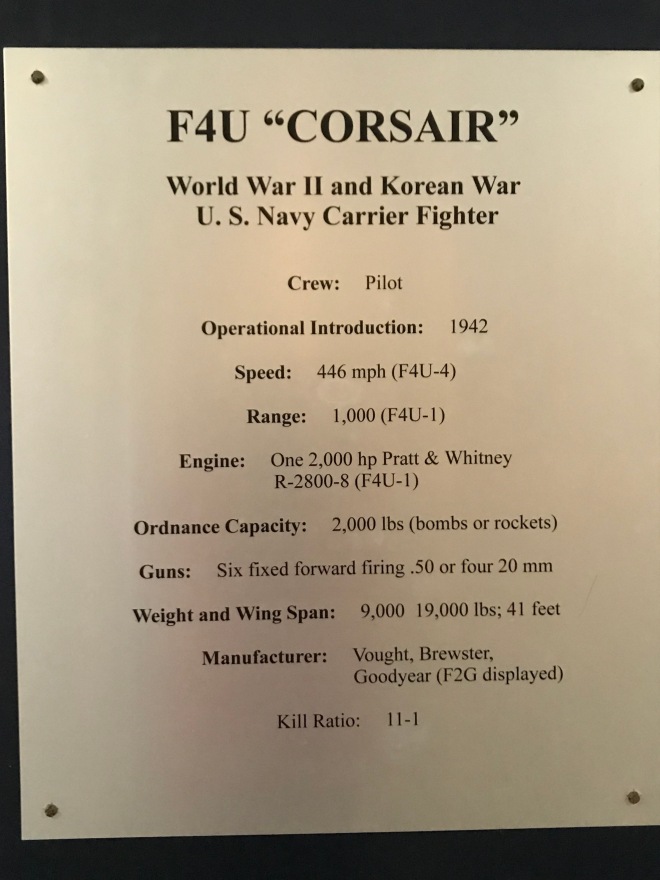 We had hoped to tour Charleston again but the weather was still yucky.  Instead we were happy to provision at a local Trader Joe’s and less than excited to suffer through laundry at the outdoor machines before our departure early the following morning.  Charleston is on our “return to” list!

On our way again, we buddy boated with Melody in Sea to Georgetown.  It turned into a day of skinny water and hyper-vigilance but no groundings, even though we saw under 5’ of depth a couple of times.  The sailboat Namaste would surely have struggled here.  Georgetown had come highly recommended and it more than lived up to its reputation.  With a 2 mile walk each way, Sammy got a groom.  A terrible haircut she thinks but neat, clean and smells good.  I also decided to do something with my now straight, too long and oily hair.  I will let the pictures tell the story but it does feel good to wash and go for now.  The people, museums, shops and restaurants were first class in this lovely community.

Most unusual bridge yet.  Built on pontoons it is moved into place by boats whenever transport is needed across the AICW here.

Cha Cha crosses her wake and we all celebrate! 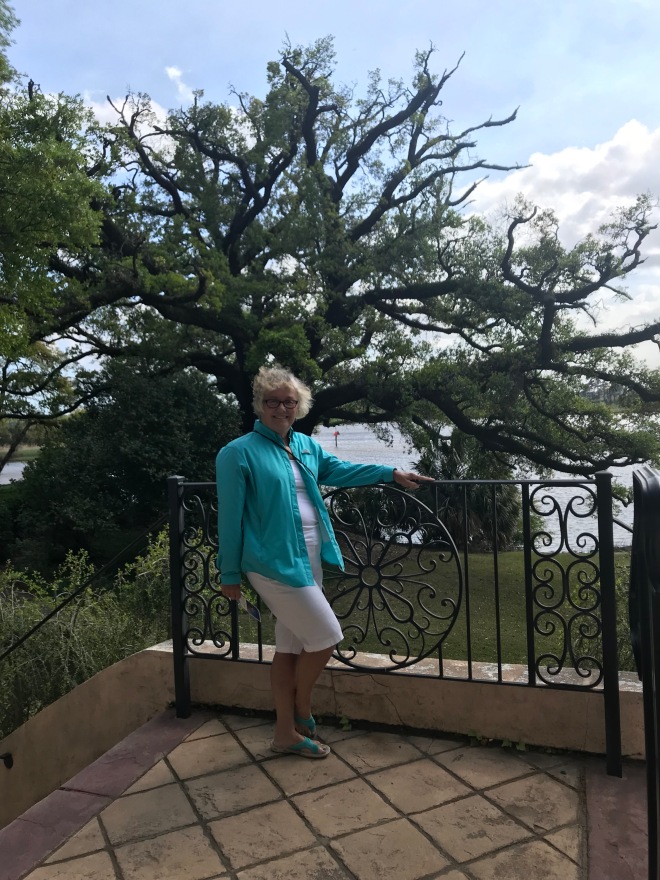 Visiting one of the lovely homes of Georgetown, SC.  Great story and tour!  The local high school was celebrating prom so the students and families gathered here for pictures.  Amazing kids and clothes!

Outside of Charleston our auto-helm decided not to hold course.  This isn’t a major issue but being on the helm can be tiring without it’s help.  After Jim and Dan tried everything they knew including moving the electronics bag away from the auto-helm’s compass, Jim called Raymarine and spoke with a guy in China (his new best friend, Lee) for over an hour until they successfully reprogrammed the settings. Today it worked like a charm – a one degree variance!  YAY!

Right now we am sitting in the Osprey Marina, just outside of Myrtle Beach.  It was a tight squeeze to get in here and will be even tighter getting out but the spot is protected all around from what may be heavy storms.  For the first time we are in an area with pines and hardwoods, no natural palms in the woods here but an orchestra of bird and peeper sounds with the biggest bee and wasps I have ever seen.  Spring flowers are popping in South Carolina.  We will stay for a couple of days because the slip fees are the best we have found – $1.00 per foot per night and the fuel is only $2.56 per gallon.  We haven’t seen these slip charges since 2008 in the Great Lakes!

Let me digress for a moment to tell you a little about the Gullah Culture created in the low-country of Georgia and South Carolina where we have spent the past two weeks.  People were shipped from Africa, mainly Sierra Leone, West Africa, to be traded along this coast as slaves.  During the hay day of the South the slaves developed a creole language and a culture rich in African influences that makes it and them distinctive among African Americans of today.  Most importantly, although they did not receive any credit, they brought with them knowledge of how to make a valuable Indigo dye and how to cultivate rice in saltwater, both of which were the mainstays of the affluent southern economy until after the civil war.  Because they experienced relative segregation and isolation living and working on rural plantations out on the coastal islands, they created and preserved their culture known as Gullah and their language known as Creole.  The culture and these slaves have been of particular interest to me since Mike spent a year in Sierra Leone in 1989 and one of his mentors/friends, Joe Opala, has written extensively on the Gullah culture which he connects back to Sierra Leone.  As with any slave culture, their history contains a sad and oppressive but proud element.  Even Wikipedia today does not mention the important economic contributions they brought to the area.  There is so much not written into our history books!  It is reported that both Michelle Obama and Clarence Thomas are of Gullah descent.

Sammy Sayz:  I got an ugly haircut from a nice lady but it is getting hot and there are no mirrors so I am good.  Mac and I had a good time together for the last week or so and I will miss him until we are together again in Norfolk.  However I have the Pelicans, Ospreys, Sea Gulls, and Terns and now there are turtles everywhere with whom to make friends.  Always so much to do when not napping!

Boat Name of the Day:  Follow Me (A boat we have seen several times but have never met the people.  Seems we are following them!)

Quote of the Day:  “Many people don’t know this, but it’s possible to read something you don’t agree with on the internet and simply move on with your life.” -@TheMichaelRock

Happy Birthday to:  Emily and Jenny

Rest in Peace:  Esther and  Dad (I cannot believe it has been 17 years today – I so wish you were here doing the Loop with us.  I wouldn’t be doing it without your love of me and of boating.)