We continue to live in slip B105 at Faro Blanco until March 26th where we are having a wonderful time with anywhere from 6-10 other looping or cruising boats and their families.  The heavy blow (25-40 mph winds) that began last week lasted for five long days never letting up but the sun stayed out and it was warm the entire time. Two outdoor weddings with dresses and hair flying took place during the wind but even the brides didn’t seem to mind.  Also, a very large vessel attempted to leave the marina before things returned to normal and ran aground in the Gulf as he left.  Apparently, the strong winds had blown the water out of Florida Bay so depths weren’t as charted.  His two large propellers were bent beyond recognition but the captain just happened to have two spares (at $20,000 each) onboard.  A couple of divers and all was well again! 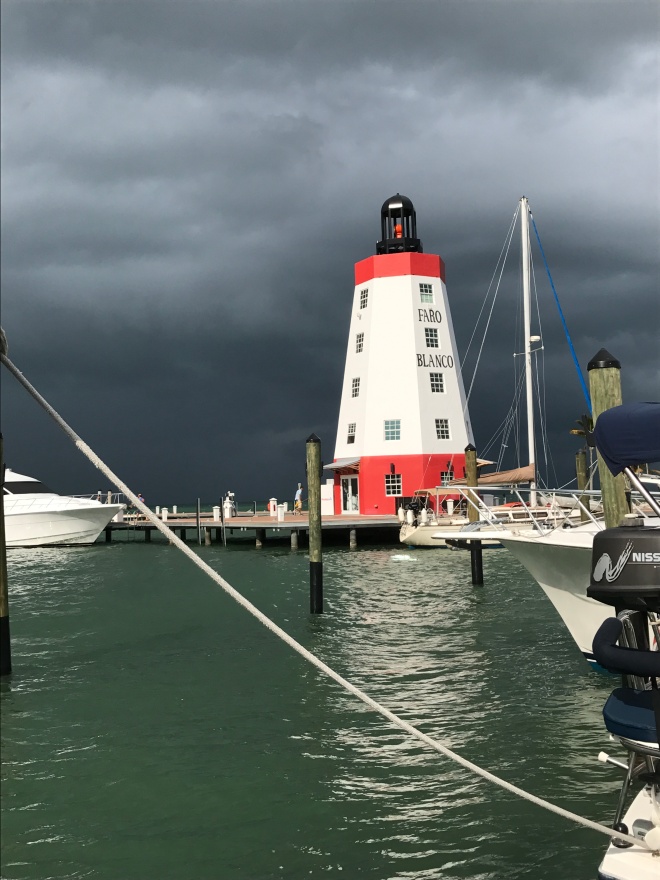 The calm before the storm 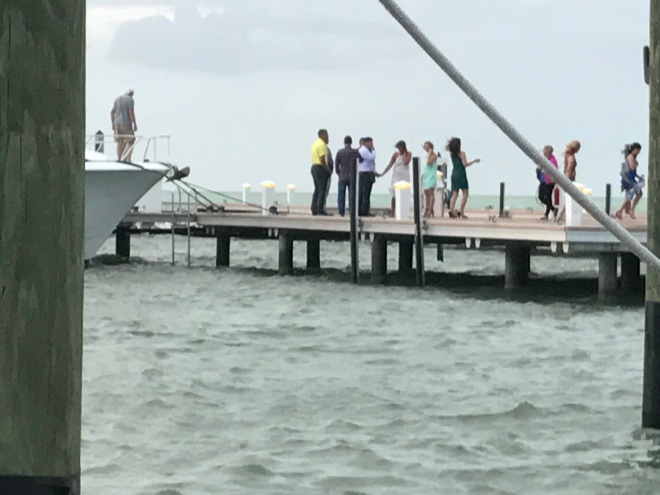 Windy Wedding on the dock.  Note the concerned captain on the left checking his lines.

Captain Jim has been smoothing out a few wrinkles on and off the Namaste.  Most significantly were the bolts that attach our Mercury 6 hp outboard engine to the dinghy.  For some time now he noticed that the bolts were corroded and simply would not turn.  This just doesn’t happen in Michigan.  We had the helpful advice of our friends which included using a “blaster” penetrating spray oil and a heat gun.  When neither of these even budged the bolts and due to the fear of cracking the engine casting, we left it to the professionals.  Two hours and $258 later (everything is relative) the engine bolts turned effortlessly and Jim could check that off his to do list and yes, lubricating those bolts is now on our monthly checklist.  Secondly, the hatch (window over our heads in the V-birth) required refinishing but because it also required removal, it obviously would be accomplished when rain was not in the forecast.  Hours of scraping, sanding, five coats of varnish and a new seal made it look and act new again with only a couple of brief downpours during the weeklong process.  Finally, back to the dinghy, while the engine was off Captain Jim scrubbed the yucky barnacles off the bottom so we are ready for our next dinghy drift.  We have also purchased new cartridges for our self-inflating life vests – one of those pesky, unglamorous, ultimate necessities. 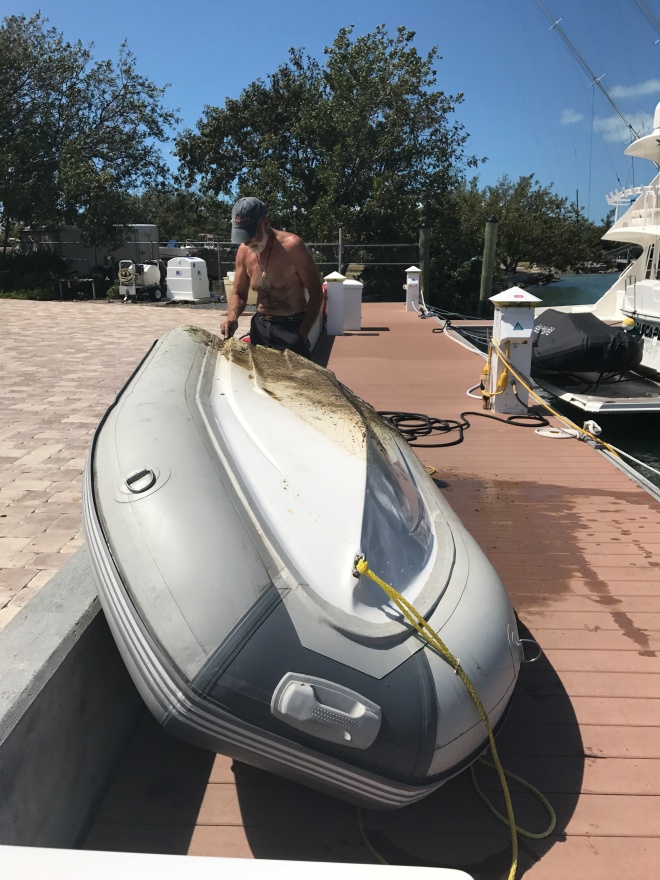 In addition to watching the wind blow, nature has been a focus of the past week.  We have seen iguanas sunning themselves and running around on docks.  In the water have been manatees, lobsters and parrot fish particularly visible at night with the neat underwater boat lights. Jim and I also went to the Crane Point Museum and Nature Center at mile marker 50 Bayside which is one of the most understated attractions in the Keys.  The Crane Family preserved the area as the 3rd largest white coral barrier reef in the world that houses the last remaining thatch palm hammocks containing rare and endangered species.  Its volunteers are truly environmental stewards that maintain the natural habitat of the old Florida Keys!  Included are 1.5 miles/63 acres of nature trails marking plants, trees and palms that lead to The Point offering a spectacular view of the Florida Bay.  A Museum of Natural History, Butterfly Meadow, Wild Bird Center and three historical homes also adorn the property.  There is a 1990’s Wyland mural painted on one wall.  On our hike we saw a nesting Osprey, a rather large spider hanging over the path in its arching web, countless butterflies and a beautiful Lionfish in an museum aquarium just like the ones Ashleigh and I saw snorkeling last year.  There is one small sign marking the entrance across from Publix, it is not to be missed! 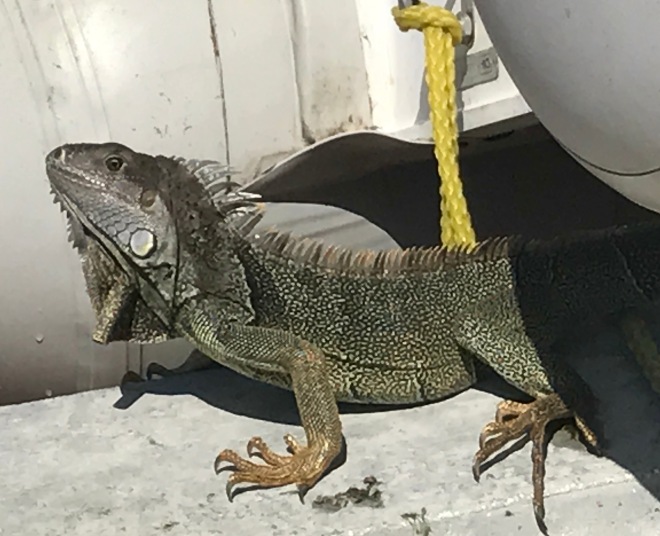 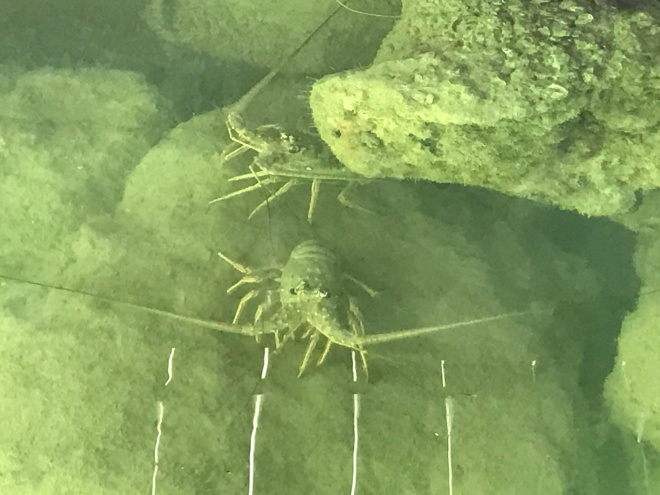 Two Lobsters.  The white lines are slats in the dock with the sun shining through 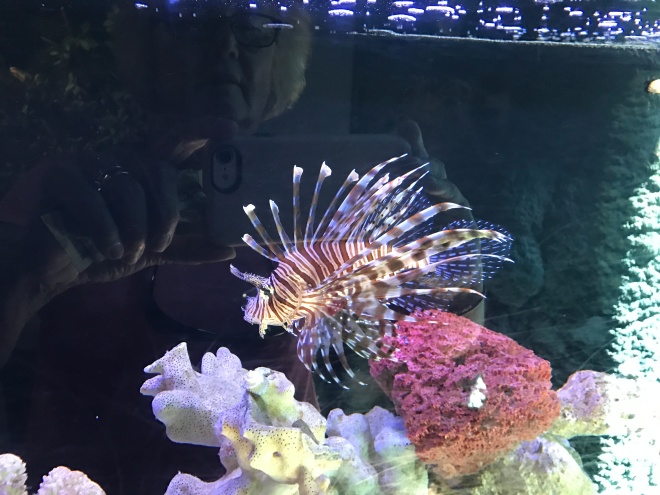 Large spider hanging over the trail on his web 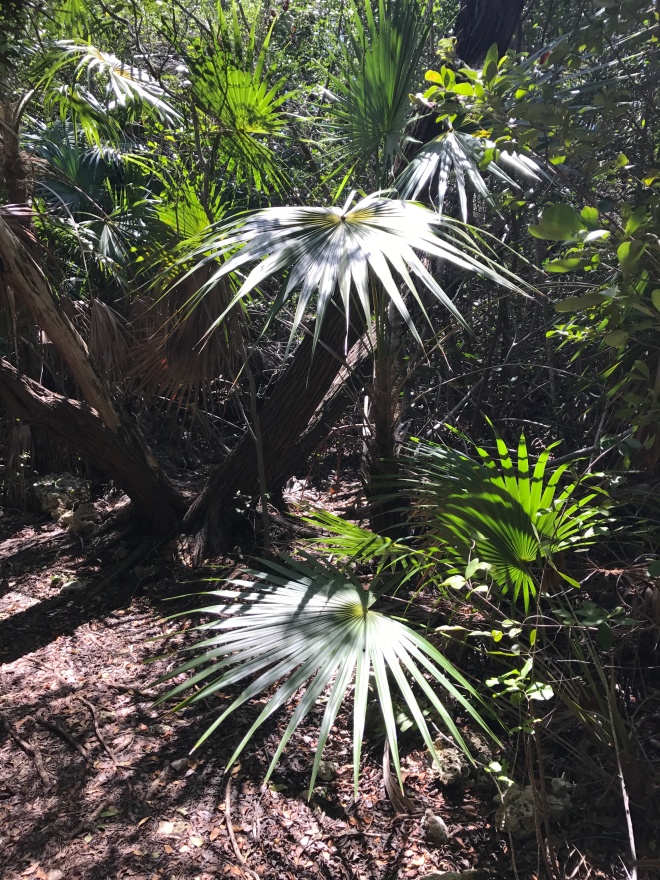 On the social side of life, we went to the local movie theater to see La-La-Land.  Emma Stone was wonderful, Ryan Gosling easy to watch and the music/dancing inspirational – highly recommended!  The rest of the story, however was walking the 1.5 miles into the 30 mph winds and spits of rain not in the forecast.  Additionally, the entertainment began while waiting in line outside the theatre with our friends plus several other retired couples and a few Marathon locals.  We were slightly late so were at the end of the line when the ticket agent disappeared into the theatre to count empty seats.  Next the cash register and/or credit card machine weren’t working properly and the 2:00 show-time came and went with about ten of us still standing outside in line.  The local flavor got a little restless and thus providing us with perhaps more information than we needed about their life in Marathon.  Eventually the lady returned, got everyone through the line and into seats before the show began, probably 30 minutes late. Our new friends were in the front row, asleep and snoring within minutes.

We hosted docktails on the Namaste one windy evening which lasted 2 ½ hours which is saying something since the air was hot and the seating hard and sparse. Obviously, the company, food and conversation were lasting.  We have also shared meals with large groups of friends and are headed to my personal favorite, the Sunset Grille, tonight with Kenny and Jeanne of Daybreak as well as Anne and Mel of Morning Star.  As I write this, though, many of our boat buddies have already either left or are preparing for leave taking to the Bahamas or to begin their journey back up the ICW to the north country.  Sunset Delight and Shell Bell left last week, Seascape, Tranquility and Miss Bailey left yesterday morning, Our Plan and Kharma are leaving tomorrow and Morning Star and Sweet T are leaving Monday.  Each of these departures requires a docktail party or celebratory dinner.  Daybreak, Gypsy Soul, and the Namaste remain as well as the new boats that arrive each day.  Oh, and I didn’t tell you about the 110’ Freedom, sister boat to Sequoia which was the yacht serving nine presidents from Hoover to Gerald Ford.  It was totally restored for $6M in 2007 and could not be more beautiful and was the marina highlight for an afternoon and evening.  We never did figure out who was aboard and the dockhands aren’t talking! 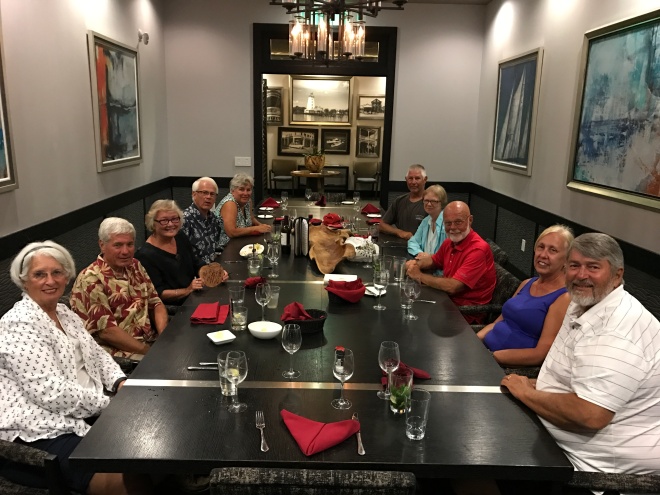 Dinner at the Lighthouse Grille – our own private room 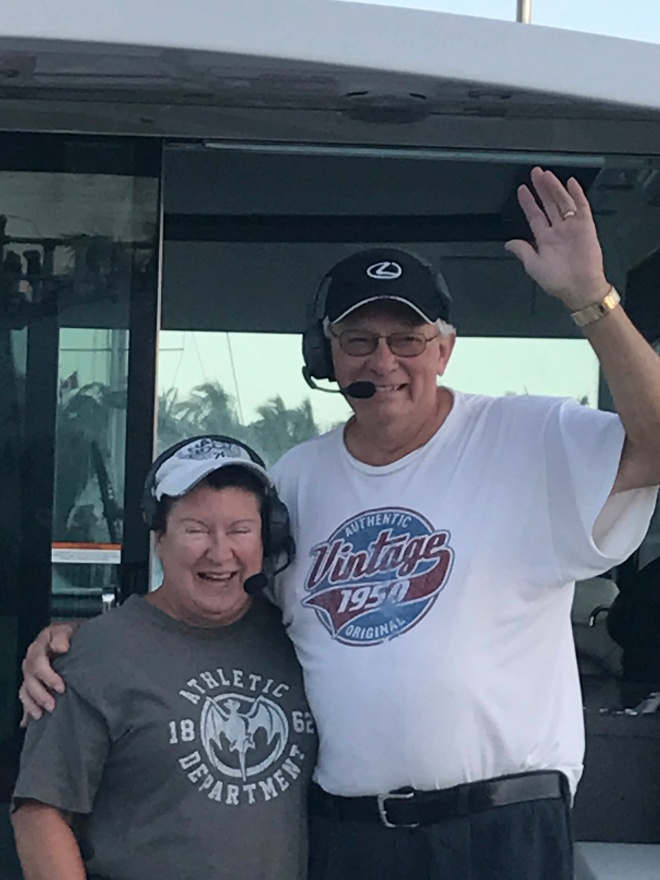 Freedom – nothing else to say! 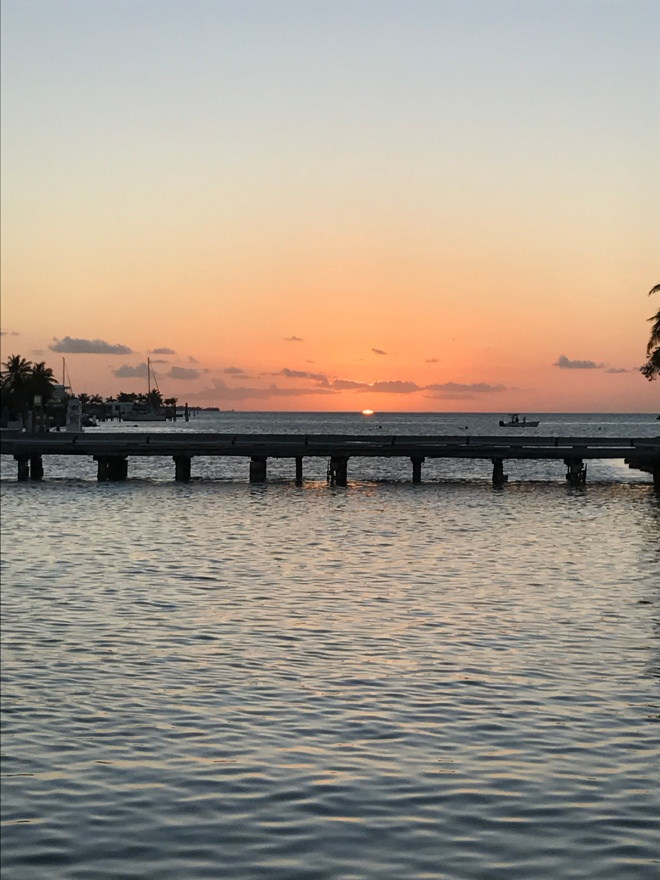 Faro Blanco is next to a Coast Guard Station and the sunset cannon will fire right now!

We mastered Active Captain today!  We downloaded a new navigation app (Garmin Blue Chart) and then added the Active Captain interactive data.  We have tried to do this several times over the last 18 months but finally decided to make it happen today as Kenny offered us a user tutorial.  After many moves, backtracks, changes of Apple password on our ipad, and a long call to Apple support we had SUCCESS!  After a French Horn concert by Jeanne, Kenny sat with us for over an hour and coffee this morning.  Practice will be the key to continued success so Jim is currently creating routes for our future plans.  This stuff is fairly intuitive but not nearly as much as we require.

Sammy Sayz:  All good here.  I did escape again the other day but they didn’t get as upset when I came tearing back to the boat upon Captain Jim’s whistle.  These high winds are most annoying.  How am I supposed to protect them and the boat at night with winds whistling in the rigging, the boat creaking against the fenders, stuff shifting about in the cupboards, the dinghy bumping against the side of the Namaste?  I don’t know what to bark at first so I just shake and whine which usually gets their attention.  My favorite cays are spent laying in the shade by the pool.

Bad boat name of the day:  Sorry (on the back of a boat going fast enough to throw up a big wake)

Quote of the day:  You have brains in your head.  You have feet in your shoes.  You can steer yourself any direction you choose. – Dr. Seuss

Congratulations to:  Ashleigh for earning her varsity letter in skiing as a fresh-woman at Milford High School

One thought on “The Good Life – Faro Blanco Resort”