I don’t think I reported quite enough about Baltimore but since the marina had really good wifi, I decided that posting the last blog was my priority.  At any rate, we loved Baltimore.  It has an amazing waterfront harbor, and we have reviewed a few waterfront harbors by now! 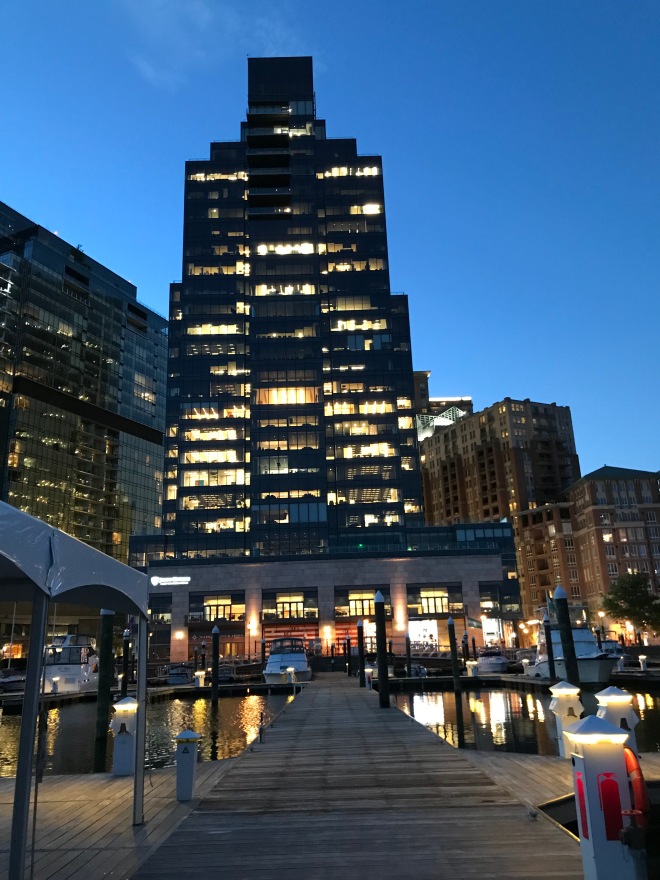 View out our dock.  Finding grass for Sammy wasn’t easy!

Photo shoot early one morning on the dock.  See the model in the orange dress?  There were at least a dozen people involved.

The Baltimore skyline is spectacular by day or night and the East Harbor marina was a good one with excellent showers, laundry facilities, a lovely boater’s lounge, and just steps to the water taxi.  The only problem was that this was the only place our insta-pot wouldn’t work – something about low voltage and high-tech smart appliances. 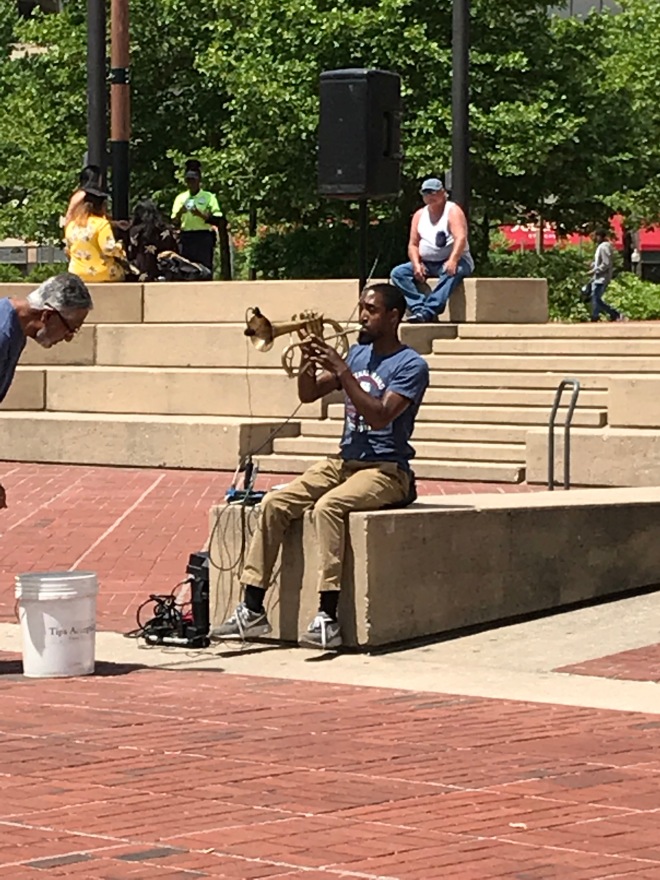 By winter a teacher and by summer an entertainer of the Inner Harbor crowd.

A little more about Fort McHenry.  We managed the three water-taxi ride to this beautiful National Park, Guardian of Baltimore’s harbor, National Monument and an Historic Shrine.  As an introduction at the visitor center, a video honored the significance of this fort to the war of 1812 and the life of our country.  In addition, the video memorialized the patriotic spirit of the Star Spangled Banner’s birth, written by Francis Scott Key after watching this monumental battle against the British in Baltimore Harbor.   In that day of slow communication the popularity of this song went word-of-mouth viral.  Hearing and singing Key’s creation has taken on whole new meaning for us.

Fort McHenry where the battle occurred.

We had lunch at Fells Pointe – a several block area of historic buildings wit reportedly 150 bar/restaurants.  Buba Gumps was also on the list to stop for a beer but the rude service lived up to its reputation, we had a water taxi to catch and a bud-light was $13 so that was a no go!

One of the many restaurants in Fells Pointe.

We walked to Camden Yard where the Baltimore Orioles play.  It is a striking ball park.  Yankee and Bruins fans come to Baltimore where they can watch a three-game series and stay in a hotel for the same cost as going to a home game in NYC or Boston.  Much of the park is open to the public so we enjoyed wandering through. 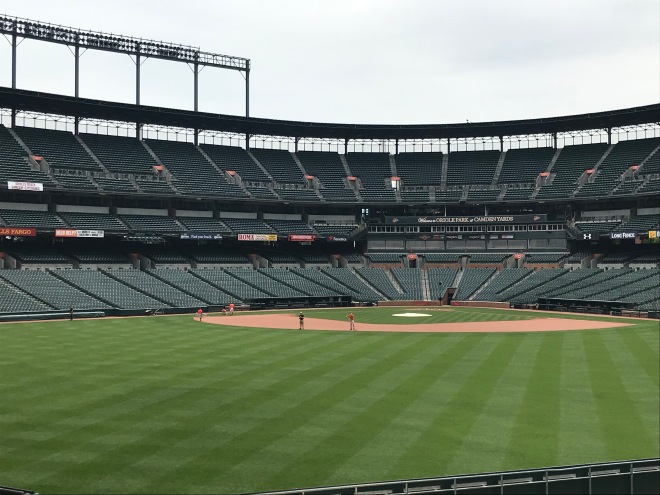 Still wish we had gotten to a game!

Our friends Jenny Lynn and Dan caught up with us in Baltimore and we celebrated with yet another birthday dinner (Dan and me)!  I got a pair of Namaste socks and Dan got a hand-made shell necklace, a pony swing bandanna, and a sponge paint brush.  Birthday shopping on the boat can be tricky!

Yet another birthday celebration and dessert!

On a beautiful, and sparkling clear morning we left Baltimore heading up to the top of the Chesapeake Bay and across the C & D Canal stopping at Chesapeake City.  It was as choppy a ride as we had anticipated, taking the waves on our rear port quarter and then broadside for several hours but once we entered the 450’ wide by 15 mile long C & D canal the water settled right down.

Note the red, white and blue marker just below the blue water tower.  This marks the spot where Francis Scott Key was said to have written the Star Spangled Banner while aboard a British Prisoner Ship during the battle at Fort McHenry.

Another historic story here.  The canal was dug by the hands of 2600 men with picks, shovels and wheel barrels between 1824-1829.  It shortens the water travel between Baltimore and Philadelphia by more than 300 miles and remains one of the world’s busiest canals with ships carrying millions of tons of cargo annually.

We stopped in Chesapeake City as they offered a free dock and luckily for us there was a small space between two larger boats where we barely squeaked in.  Our friends Jeanne and Kenny on Daybreak who live locally offered to pick us up for a little provisioning and a lovely dinner together.  The town itself was as quaint as they come with lots of holiday festivities in 80 degree weather.

The Namaste literally squeezed between two boats on the Chesapeake City Dock. 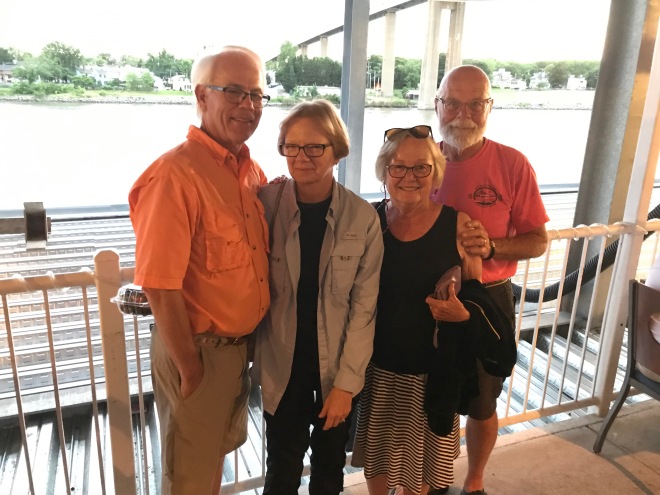 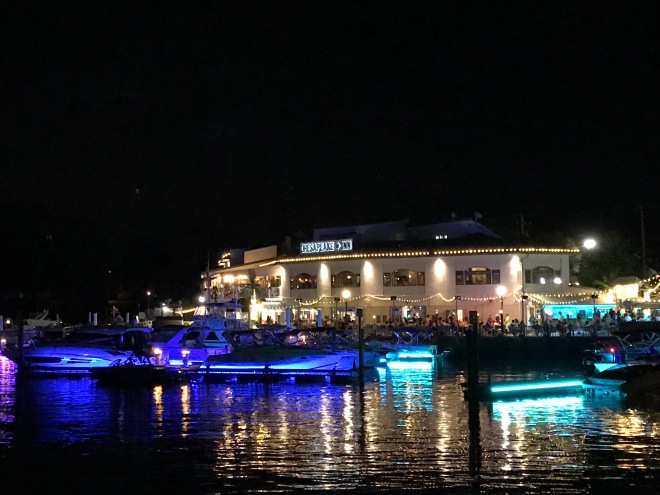 The Marina at Chesapeake City – Party Place but not as noisy as it looks.

The other face of Chesapeake City.  Ice cream was 25 paces from the Namaste!

We have seen at least four weddings but this dress was surely notable.

On Sunday morning we cast off early as the boat traffic in the middle of Memorial Day weekend promised to be heavy.  It was one of those perfectly gorgeous mornings where we didn’t see another boat but kept company with bikers and runners on the trail that runs along both sides of the length of the C&D Canal.  We were bucking the current the whole way out but when we reached the Delaware River and turned right we caught the ebb current (outbound) and experienced speeds up to 12.8 mph or a 4 mph push. 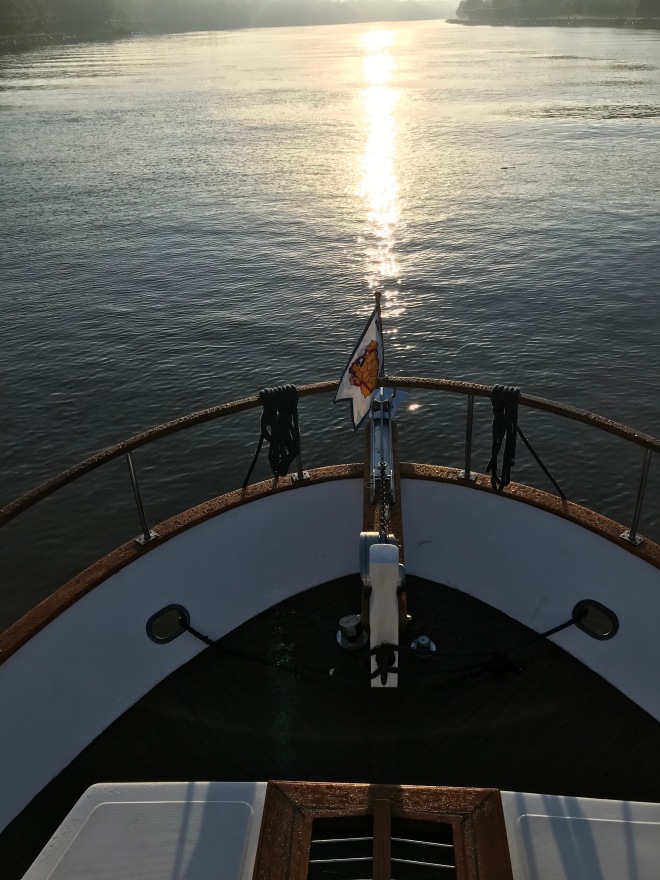 The sunbeam guiding our way down the C & D 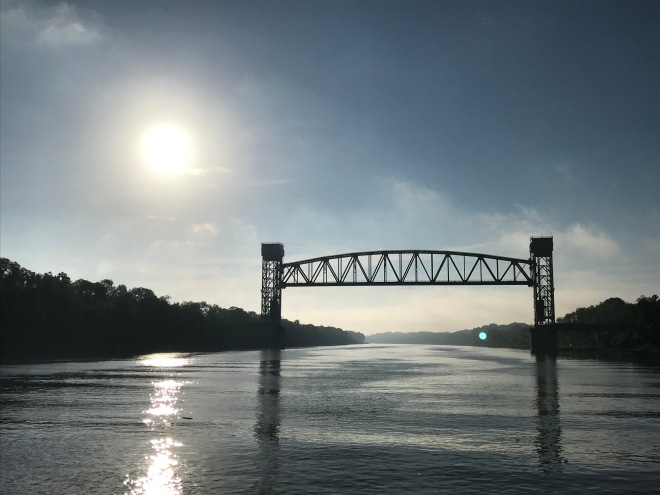 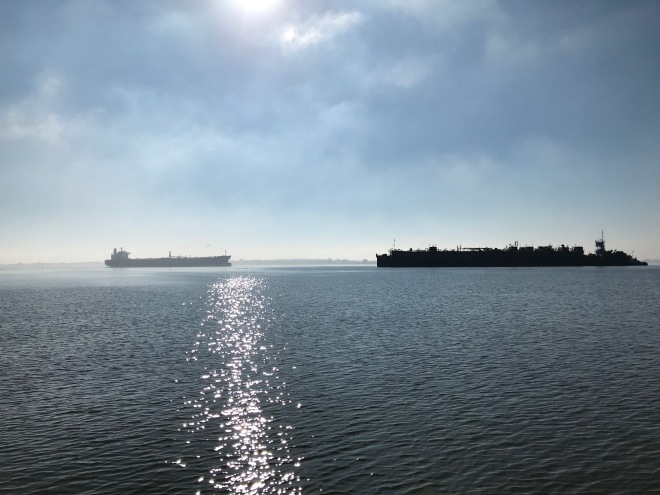 As we approached the Delaware River this is what greeted us.  Two ships passing at daybreak!

Now, the Delaware River dumps into Delaware Bay, a huge body of water.  Because it was calm we had a great ride all the way to Cape May arriving by mid-afternoon to docktales with 12 other Looping couples.  We met up again with At Ease and United 771 with whom we had shared time way back in Herrington Harbor and also met many new friends.

Our stay in Cape May was a highlight.  As I posted on FB, we literally “biked into” a memorial day ceremony on the Jersey shore.  I will let the pictures tell this amazing story. 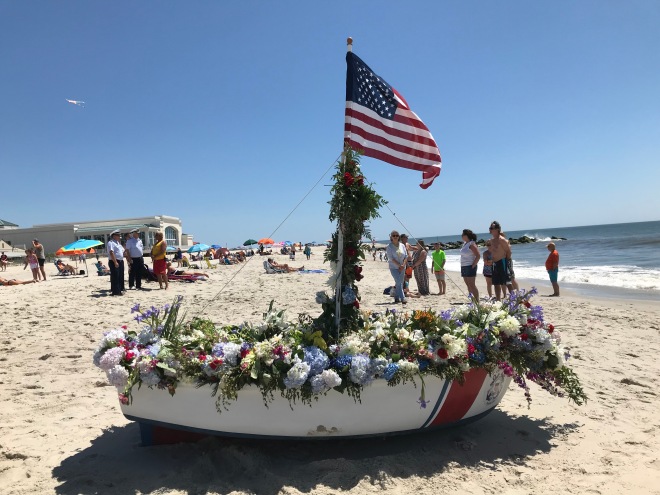 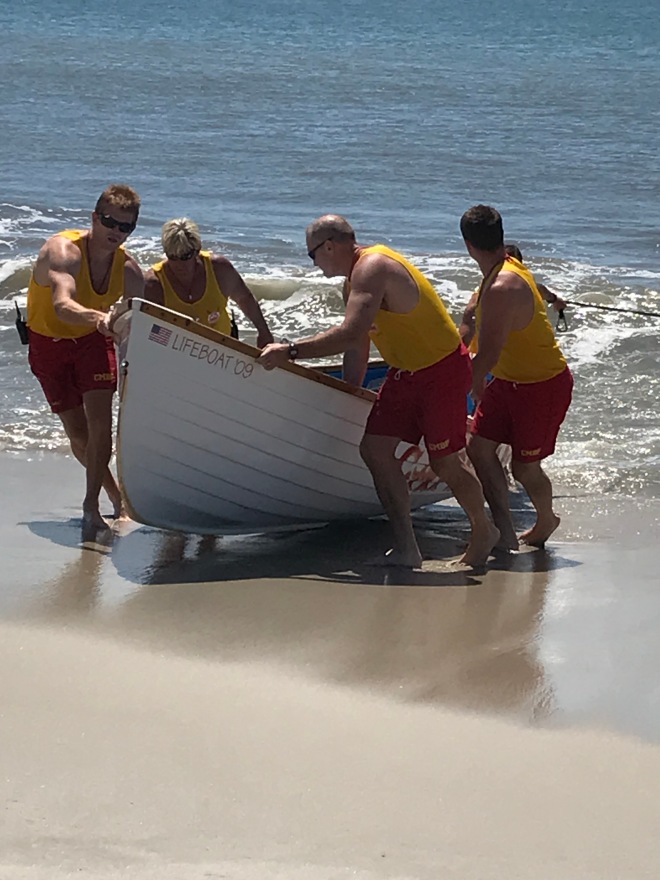 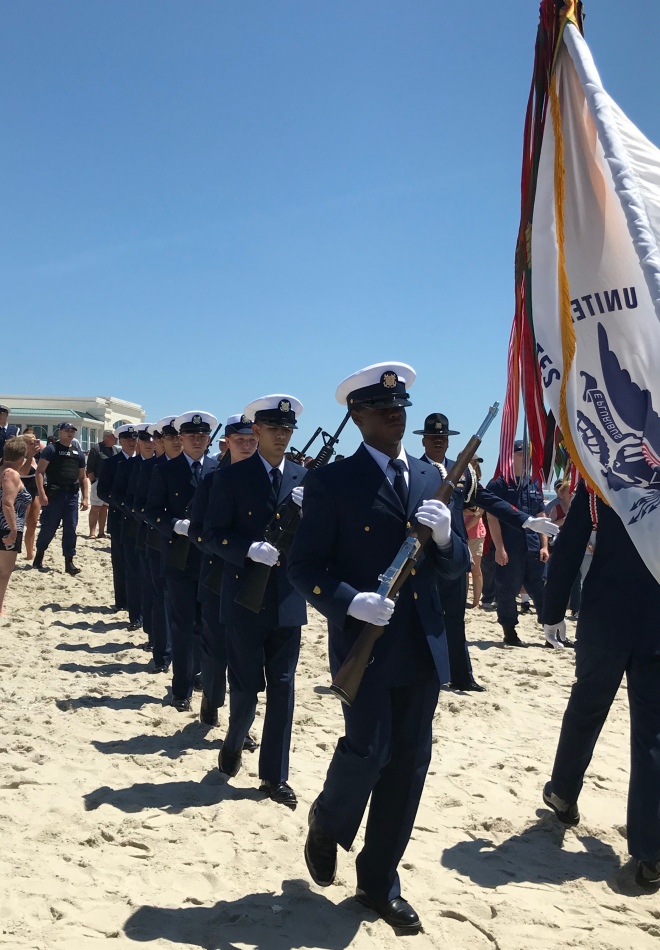 Gun salute as the dory is pulled out to sea.

After we recovered from the intense emotions of the ceremony,  we spent the whole day riding the busy streets of Cape May with lots of other tourists in beautiful weather.

Congress Hall, now a resort similar to The Grand in Michigan

Beautiful historic district of Cape May.

A side story:  When she was 18 and he was just a couple of months old, Jim’s mom (Carolyn)  moved by military transport train from Detroit to Wildwood, N.J. where his Dad (Joe) was stationed in the Navy.  Story has it that he slept in a dresser drawer in a boarding house just north of Cape May and perhaps like the one below.  Having heard the stories about this adventure, he reports it feels somewhat like coming full circle.

The next leg of this trip was a unique one in that it demanded an “outside” or open ocean route up to Atlantic city.  We waited for a good window and left with Steadfast  and several other faster boats at 6:30 a.m.  It was a gorgeous day and the ride was fine but instead of waves we experienced swells pushing us from behind as well as broadside.  These were a new and inexplicable  sensation for Sammy so they caught her by surprise more than once.  It was a short 4 hour trip pulling into Atlantic City where neither Jim nor I had ever been before. 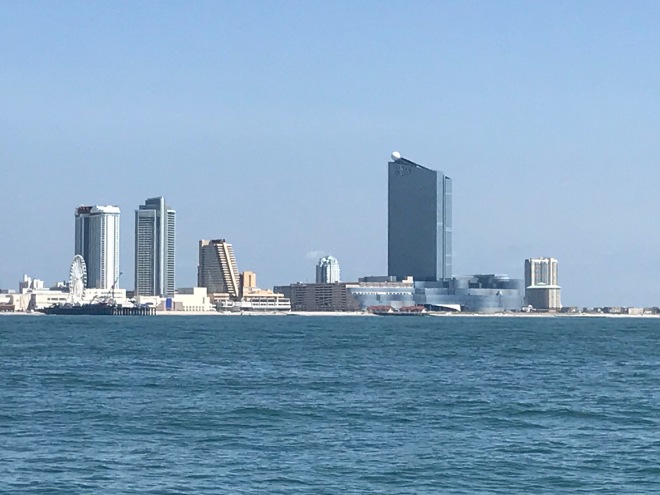 Strolling the Atlantic City boardwalk on a beautiful afternoon. 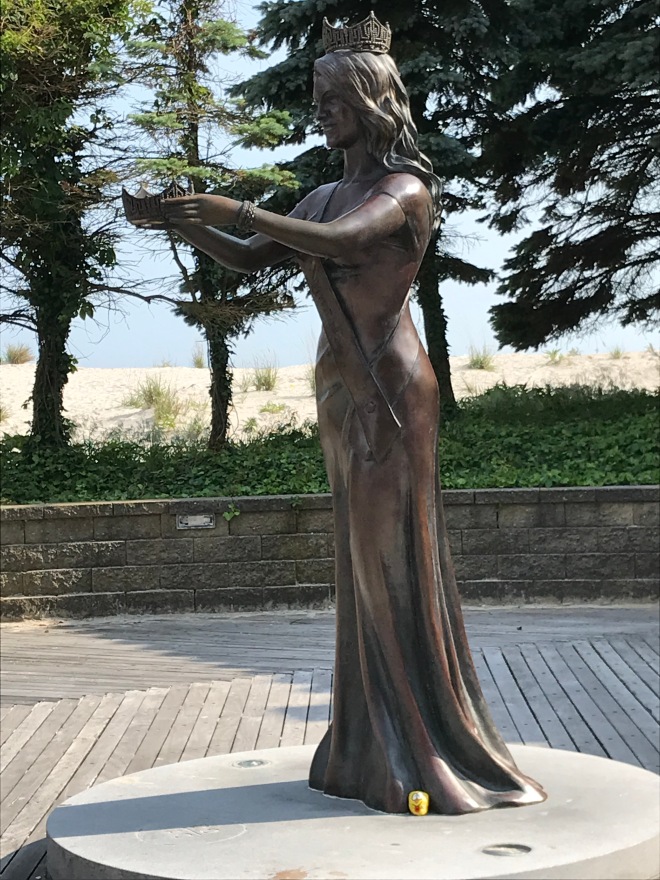 Not sure of the story but this statue honoring “Miss America” adorns the boardwalk.

Four Navy Seal’s Interdiction boats tied up on our dock.  These are “used to destroy, damage or intercept something such as an enemy line of supply by firepower;  used to stop or hamper bad-guy boats.” 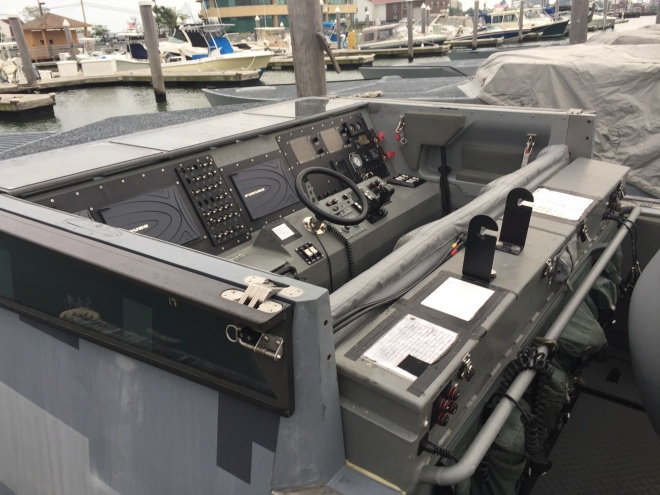 And you should have seen the dudes who man these boats.  Nothing to mess with – I didn’t take their picture!

The following morning was a good weather window for another “outside” leg up to Manasquan, NJ.  However, just as we were untying the lines and backing out of the slip, a dense fog rolled in off the Atlantic and visibility dropped to almost nothing.  We were following Steadfast out the channel and when I could no longer see them ahead, I quite firmly said, “this is not OK with me.”  Captain Jim, thinking the same, began the turn-about for a return to our slip on H dock at the Golden Nugget Marina and here we sit, probably for the day as currents and tides will keep us here until tomorrow.  It is now 9:30 and the fog has not lifted.   Someday I’ll talk about the impact of tide and currents on Great Lakes boaters schedules and nerves!  One thing is for sure, every day is different!!

Fog was actually worse than it looked in this picture.  Less than 1/4 mile and didn’t lift until after 2 p.m.

Good Boat Name:  No Name (or markings of any kind)  on the Navy Seal’s stealth boats pictured above

Quote of the day: I want to be political today but resist the temptation as it only seems to divide us more!  Thus, here is a lovely quote,

Perhaps of interest: Autism is something I have been reading about, post retirement.  This article has the most interesting and helpful information I have seen yet.  Thanks to Amanda for posting.